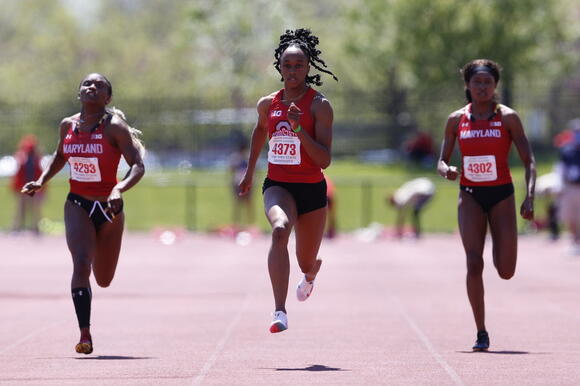 Senior sprinter Anavia Battle raced to success growing up in Inkster, Michigan, leading her to the Ohio State, the 2020 Tokyo Olympics and now the Big Ten Indoor Championships.

Now, Battle said all eyes are on the Big Ten Indoor Championships.

Battle will represent Ohio State track and field in two events this weekend in Geneva, Ohio, competing in both the 60- and 200-meter dashes.

Battle said she has been preparing for the meet this week and nationals, which will be coming up in March, but her focus is on team sisterhood this weekend.

“We got to be the loudest. We support each other in practice,” Battle said. “It’s very important that we keep the motivation going. We got to keep the energy there in order for them to perform the way they need to perform.”

The Olympian won’t be alone in representing Ohio State in Geneva. She will be joined by her fellow Buckeyes teammate and Tokyo Olympics roommate senior thrower Adelaide Aquilla.

Aquilla said assistant coach Travis Coleman has really helped her, and she aims to beat her personal best, 19.12 meters, and the national record.

“Hoping to break the national record this weekend. It would be such a great feeling,” Aquilla said. “Seen some really great throws in practice.”

Aquilla said working with Coleman has allowed the pair to build a bond between them, helping her improve in her shot put events, which she will compete in this weekend.

Aquilla remains on the Bowerman Watch List presented to the most outstanding male and female NCAA track athletes. Head coach Karen Dennis said she is beyond thrilled about individual success but still has the Big Ten Indoor Championships in mind.

She said because of this, the importance of her coaching staff’s impact on the Buckeyes is huge.

“Every event group is doing their own fine-tuning, so I have a great group of coaches who are making sure our athletes are going to go into the championship at their best, rested and ready to compete,” Dennis said.

The 2022 Big Ten Men’s and Women’s Indoor Championships will take place Friday and Saturday at the SPIRE Institute in Geneva, Ohio.