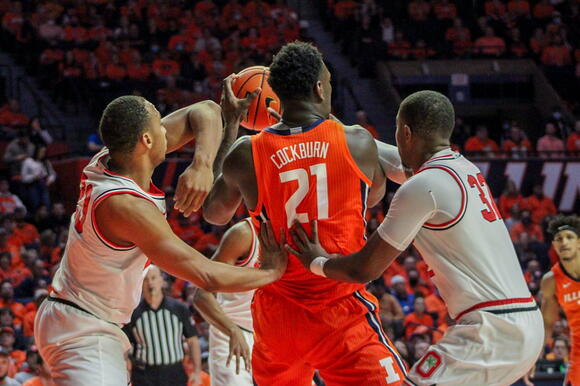 Freshman guard Malaki Branham produced a game-high 31 points as the No. 22 Buckeyes squeaked past No. 15 Illinois 86-83 Thursday.

The Illini jumped out to a fast start on the offensive end thanks to a barrage of 3-pointers from graduate guard Alfonso Plummer — who hit his first four attempts of the night. Plummer finished the first half with 18 points as he hit six of seven 3-point attempts in the frame. The Utah transfer finished the night with 26 points on 8-of-10 shooting from 3-point range.

Plummer’s hot start lifted the Illini to a 21-8 lead, but the Buckeyes battled back to close the deficit to one point at halftime. Graduate forward Kyle Young was the primary reason for Ohio State’s surge, dropping 13 first-half points on 5-for-5 shooting. Young was one of four Buckeyes to score in the opening frame.

Ohio State picked up its first lead of the game on its opening possession of the second half, thanks to a turn-around fadeaway jumper from junior forward E.J. Liddell. The Buckeyes never relinquished the lead after that point.

But the Illini kept things close behind a 10-0 run brought the Buckeyes’ lead down to 78-76 with 1:49 remaining in regulation. Senior guard Trent Frazier brought the Ohio State lead down to one with 14.6 seconds remaining on a fade-away 3-pointer.

But, Frazier threw the ball away with 3.9 seconds remaining in regulation to end the comeback attempt for the Illini.

Although the Ohio State bench helped jump-start the Buckeyes early, Illinois found its niche in the paint — where it outpaced Ohio State 34-22.

Leading the Illini’s interior attack was Big Ten Player of the Year candidate and junior forward Kofi Cockburn, who finished with 12 points. Ohio State made life difficult for Cockburn, though, as he shot just 33 percent from the field.

Cockburn fouled out with 4:33 remaining in regulation.

While Cockburn was impacted by Ohio State’s pressure, he was still a menace on the offensive glass — corralling two offensive rebounds. The Illini collected 12 offensive boards, while producing 17 second-chance points.

In his return to his home state, Liddell gave the Buckeyes an offensive lift — scoring 21 points on 7-for-15 shooting from the field.

The Buckeyes shot 81 percent from the free throw line on 32 attempts.

Ohio State stays on the road Sunday, heading to College Park, Maryland, to take on unranked Maryland at 4 p.m. The game will be televised on CBS.