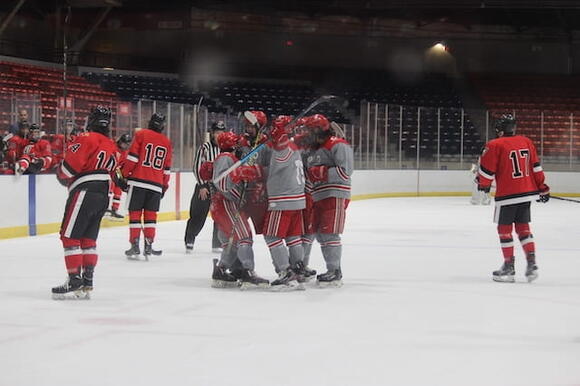 After a one-year hiatus due to the pandemic, the Ohio State men’s club ice hockey team bounced back with a successful 2021-2022 campaign.

The Buckeyes (11-9) get back on the ice against Rider (19-4) in the American Collegiate Hockey Association’s Southeast Regionals at OhioHealth Chiller Ice Dublin at 1 p.m. Friday. The winner will proceed to the National Championships in St. Louis March 10-20.

Ohio State started the season in front of a packed crowd at the Ohio State Ice Rink against in-state rival Cincinnati Oct. 8, 2021. The Buckeyes defeated the Bearcats 5-4 in an overtime thriller in front of fans for the first time since the 2019-20 season.

“It seemed like all our friends and families came out to watch and see us play after not playing for an entire year,” Vineyard said. “That was really special.”

The Buckeyes ended up splitting that weekend series with Cincinnati before going on a four-game win streak, beating Indiana and Xavier away from home and sweeping Bowling Green in a two-game home-and-road series.

Ohio State was swept at home by Louisville toward the end of the fall, but the Buckeyes completed their season-sweep of Xavier with a home victory Nov. 21, 2021, before splitting their home series against Kentucky Dec. 3-4, 2021.

In January, the team learned they weren’t able to practice or play at the Ohio State Ice Rink due to updated COVID-19 policies on campus . As a result, they were only able to practice once a week off campus. Vineyard said this dealt a blow to the team’s playoff race.

“It was like dragging a piano, trying to play games against teams that are practicing normally,” Vineyard said. “We’re not getting as much work and improvement as we could get.”

During this span, three of Ohio State’s eight games were canceled, including the second of a two-game series against Miami (OH) due to COVID-19 and an away series against Wisconsin the first weekend in February that was canceled due to a snow emergency.

In this section of games, the Buckeyes lost a close one to Miami (OH) and split their series against Ohio Jan. 21-22. Then they had an away series against Michigan in Ann Arbor, Michigan, in which they split the series Jan. 28-29.

Head coach Greg Corcoran said splitting the series against the Wolverines was huge and  it was one of his favorite moments of his first season coaching the Buckeyes.

“Beating Michigan on their senior day was one of my favorites. Playing a full 60-minute game where I thought we dominated every aspect of it,” Corcoran said. “That’s probably the best game we played all year.”

Ohio State ended the season with a series sweep of Dayton Feb. 11-12 and then a home loss against Penn State in its season finale Feb. 13. These were the most important games of the season, Vineyard said.

“We were kind of on the cusp of getting into Regionals,” Vineyard said. “We kind of had to win all three games or at least do really well and try to clinch our spot.”

The Buckeyes secured the No. 11 seed in the Southeast Region. However, before they could prepare for that, their league playoffs awaited them.

In their first game of the Tri-State Collegiate Hockey League playoffs, Ohio State played Kentucky in a high-scoring affair that saw the Buckeyes prevail 6-4 over the Wildcats Feb. 18. Hubbard said he liked what he saw out of the team during that game.

“We put our full effort in,” Hubbard said. “That definitely helped us.”

The Buckeyes then fell in their second game of the playoffs against Miami (OH) 4-0 Saturday. Vineyard said that just like in the regular season, consistency was an issue that showed up once again in the playoffs.

“We didn’t necessarily play horrible, but you could tell that our energy level was not the same,” Vineyard said. “I think that’s a prime example of us not being consistent.”

Consistency is something the Buckeyes will need in Regionals to make a run to punch their ticket to the national tournament. Corcoran said he believes his team has what it takes.

“We need to really make sure that we’re playing our game with all of our guys engaged and involved,” Corcoran said. “When we play like that, we can do some special things.”