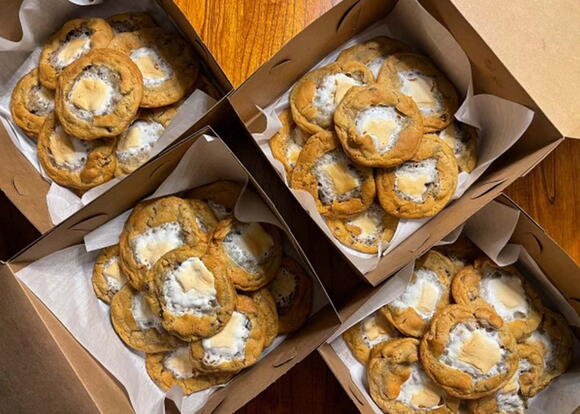 It can be hard to balance life as a college student, but Elizabeth Johnson has found a way to pursue a childhood passion while being a full-time student at Ohio State.

Johnson, a third-year in psychology, is the owner of Eliza’s Cookies & Treats , a Black-owned home bakery in Columbus. Johnson said having her own food-related business was something she has wanted since she was young.

“I used to bake cookies and bring them to my high school,” she said. “People would come grab cookies, and I would be out halfway through the day, so I knew I had something special.”

Eliza’s Cookies & Treats was founded in November 2020 but officially opened with a completed website in March 2021. Unlike many other small businesses, Johnson said opening her business in the midst of the pandemic has helped her early success.

“The pandemic actually benefited me a lot, as it gave me the time I needed to strategize,” she said.

Johnson operates the business singlehandedly, including baking, packaging and delivering orders herself, she said. Running a small business can be difficult, but she said it has helped her learn to manage her time better.

“It was definitely overwhelming in the beginning because I did not have the knowledge I have now,” she said. “But I appreciate the difficulty because it helped me find different ways to organize my time and come up with different ideas.”

Johnson said she is known for her signature s’mores cookies but also features a variety of different cookie flavors, such as chocolate chip, chocolate chip walnut and snickerdoodle. She said she also offers vegan and gluten-free options.

Johnson said she has had plenty of help from her parents during her first year of operation. Her mother, Anita Johnson, said she is glad to see her daughter following her passion.

Anita Johnson said she believes her daughter’s first year as a business owner has been successful, despite her being a full-time student. She said her daughter has taken her past advice to heart.

“I told her to focus on what she does well, and to be open to ideas and suggestions,” Anita Johnson said. “I told her to try new things to figure out what works and doesn’t work and work on the things she needs to improve on.”

Khari Lamar, a second-year who is undecided, said she has been a customer at Eliza’s Cookies & Treats since it opened. Lamar said the work Elizabeth Johnson puts into her business speaks for itself and is something prospective customers should support.

“Elizabeth is such a hard worker — it’s an actual business that she is running,” Lamar said. “She’s really been doing her thing for quite some time now, and everyone should support that.”

On the bakery’s Instagram page , Elizabeth Johnson has supported other Black-owned businesses during Black History Month by highlighting their work in individual posts, which she calls “Black History In Progress.” She said she has and will continue to highlight a total of 17 businesses throughout the month of February.

“A lot of my friends have Black-owned businesses that are really impacting the community,” she said. “I feel like Black History Month just talks about Harriet Tubman and Martin Luther King Jr. when there are Black people making history right now.”

Moving forward, Elizabeth Johnson said she hopes to set an example for other young people who may be thinking about starting businesses of their own.

“I’m only 20 years old, and I have a lot more to prove to myself and others,” she said. “I want to show other young people that you can do this if you really put your mind to it.”

Elizabeth Johnson said customers can order items through her website . After placing an order, customers will be given the location of the bakery, which is open Sunday through Monday from 10 a.m. to 4 p.m., according to the website.