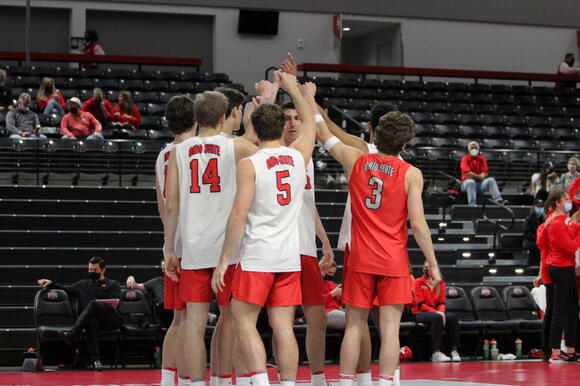 After earning their first Midwestern Intercollegiate Volleyball Association win of the season Sunday, the Buckeyes picked up their second in convincing fashion.

“It was good to see a match like tonight where you get to see their practice and hard work pay off,” head coach Kevin Burch said.

In set one, the Buckeyes started with a 6-0 lead after two aces from freshman middle blocker Cole Young and they continued the energy, building a 10-2 advantage.

The Buckeyes kept up the momentum, but the Hawks closed the gap 17-19 with kills from senior outside hitter Manuel Hernandez.

The Hawks and Buckeyes started set two 10-all until a 4-0 run by the Buckeyes pulled them ahead 14-10.

After a huge block from sophomore setter Noah Platfoot against Hernandez, the Buckeyes increased their lead 18-13, prompting a Hawks timeout.

Starting the third set 7-4, the Buckeyes kept up the pressure with kills from freshman outside hitter Kyle Teune and Young.

Quincy was never able to secure a lead, getting no closer than three points behind the Buckeyes to end the series 25-18.

The Buckeyes will be back in action at home Friday to face Lindenwood at 7 p.m. The game can be streamed on Big Ten Network Plus.