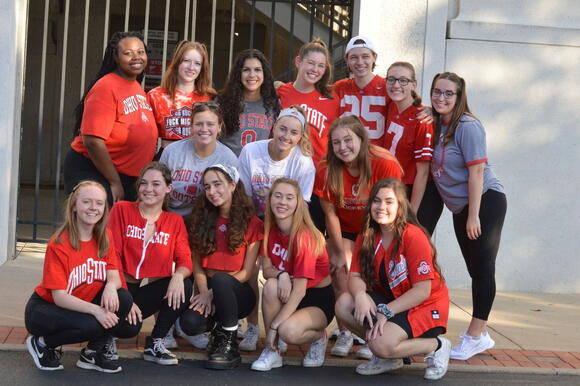 Coming out of a four-year competition hiatus, hip-hop dance student organization Stylez Dance Group is preparing to compete once again.

Stylez Dance Group will head to Wittenberg University Sunday for Dance, Stomp, Shake , a competition that celebrates the culture of hip-hop, Maddie Rogers, a third-year in arts management and vice president of the club, said.

Although the group has not competed in four years due to personal conflicts and the pandemic, Rogers said members of the organization have continued to perform at events such as BuckeyeThon 2021 and showcases put on by Dance Connection .

“We kind of had fun with [BuckeyeThon] because we knew it was just a performance. And of course, we wanted to do our best, but I think we focused more on the energy we put into it,” Rogers said. “For this competition, we want that energy, but it’s also, like, the choreography has to be good, the positions have to be good — which is what we’re working on today — the transitions, just everything has to be perfect.”

Preparation for a perfect, competition-worthy routine begins with mixing approximately five songs into one cohesive track, Rogers said. However, preparation is more complex than choreography and a handful of songs, and Rogers said they also have to consider behind-the-scenes processes, such as ordering costumes, filling out forms and collecting donations.

With this being the first competition anyone on the team will attend as a member of Stylez, Leah DeVito, a second-year in English and member of the group, said members aren’t sure how well they will place. However, they do plan on putting their best foot forward.

“My expectation is that everybody’s going to be really professional and kind of a great, like, role model for those of us who haven’t been that experienced with competition dance, like myself,” DeVito said. “I’m just looking forward to this different kind of stage for our team to get on and just have a good time and, hopefully, win.”

DeVito said competitions and performances differ in the audiences they attract. Performances are specifically designed for the audience members to enjoy and cheer on the dancers, but that is not necessarily the case at competitions, she said.

“There’s a definite different feeling from the audience’s perspective. Like, they’re just there to cheer us on. They’re happy we created this product for them,” DeVito said. “Whereas for competition, we’re really just, like, cleaning and making sure our product is basically perfect to go against our competitors. And everybody in the audience isn’t necessarily there to support all the teams.”

DeVito said although directions for the group after the competition are not set in stone, members plan to have fun regardless.

“This competition might honestly be the last big event that we’re working towards,” DeVito said. “And then after that, we might just be preparing for next year.”