After a successful opening weekend that saw the Buckeyes win three of four games in Port Charlotte, Florida, they’ll lean on two players they believe will lead the team most this season.

Senior left-handed pitcher Griffan Smith and senior infielder Zach Dezenzo were voted as team captains. After the last two seasons were impacted by the  pandemic, Smith — who earned captain honors for the second straight season — said he feels honored to lead Ohio State into its first campaign with Big Ten play in two years.

“It shows the respect that my teammates have for me,” Smith said. “It’s kind of an acknowledgement to me that what I try to do every single day, building that trust and having a strong character, while doing everything I can for the team; for the other guys to see that is really cool.”

The Buckeyes won their first three games to start the 2022 season, keyed in part by four hits and three RBIs by Dezenzo.

The Alliance, Ohio, native said it’s a huge honor for him to be named a captain.

“I’m humbled by just the fact that my teammates chose me to lead them as their captain,” Dezenzo said. “It’s probably one of the biggest honors of my life up to this point, just to be named captain of the Ohio State baseball program.”

In 2021, Dezenzo finished second on the team with a .302 batting average alongside nine home runs. Smith appeared in 10 games and made one start, allowing 20 hits in 18 2/3 innings.

Head coach Greg Beals said the Buckeyes voted for their pair of captains based on the way they carry themselves, earning the respect of their peers.

“They were voted because I see and know how those guys act,” Beals said. “It’s cool to see the guys in the locker room see and respect that as well.” 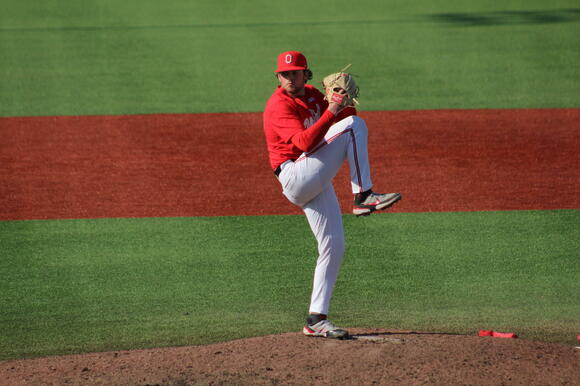 Smith said the offseason was beneficial for a variety of reasons. With COVID-19 restrictions loosened compared to last season, the Buckeyes are eager for a return to a more normal season.

“Guys love coming to the field early and staying here late,” Smith said. “I think now that’s mostly behind us, all eyes are on baseball, full head of steam.”

Dezenzo and Smith have played together since the 2018-19 season, when the former joined Ohio State’s program as a freshman.

The Buckeyes won the Big Ten Tournament that season, when Smith threw 5 2/3 innings of one-run ball and Dezenzo went 1-for-4 in the championship game against Nebraska.

The pair’s bond has grown in the three seasons since, and Smith said Dezenzo’s humility makes him a good teammate.

“Zach is the guy who always does what he says he’s going to do, and he does it at a really high level,” Smith said. “He cares for this team and has everybody else’s best interest as high of a priority as his own.”

On the other hand, Dezenzo said he sees leadership qualities in Smith that led to him becoming a team captain for a second consecutive year.

“His ability to influence the guys around him, especially on the pitching side of things, is evident,” Dezenzo said. “He relates and connects to the guys very well.”

Both Dezenzo and Smith have spent this offseason working on their respective games. As a pitcher, Smith said he’s worked on his pitching mechanics and added pitches to his repertoire.

“I’m a fastball-heavy kind of pitcher, so especially this offseason I’ve been throwing a lot more off-speed pitches,” Smith said. “Just getting more comfortable and confident with my change-up and curveball.”

Dezenzo said his offseason plan was to trust the process. After enduring two years of irregular practices, he says his main priority is becoming a more complete baseball player.

Not only are Dezenzo and Smith focused on improving personally, but helping the team grow in all facets of baseball.

“It’s just a process-oriented thing,” Dezenzo said. “Showing up every single day doing all the little things that may not seem important but are.”