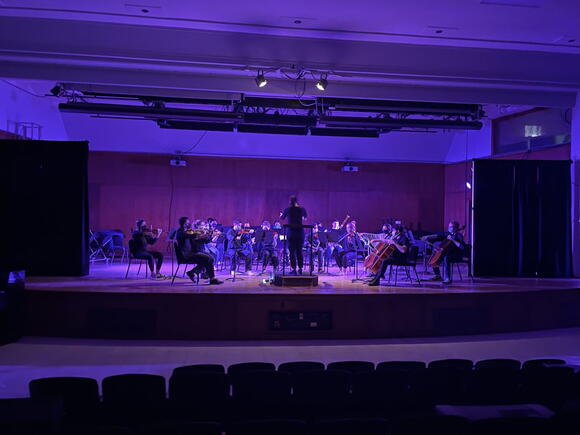 The Ohio State Symphony Orchestra will add visual elements to what would normally be just an auditory experience with a light show accompanying its next recital.

The Ohio State Symphony Orchestra will hold a free recital Sunday at 2 p.m. in the Hughes Recital Hall conducted by Samantha Burgess, a master’s student in music theory and orchestral conducting.

Attempting to increase music visualization, Burgess said a synchronized light show has the potential to convey classical music in a new way, especially for people who may otherwise consider the genre to be intimidating.

“It can be hard to grasp on to the music and relate to — it’s not something that’s in most general listening vocabularies,” Burgess said. “I think that through these multi-modal, collaborative performances, it can really open up an entryway into the music.”

Burgess said she wrote the accompanying lighting script to match the progression of Gustav Mahler’s “Symphony No. 1.”

“The light show will highlight, through the use of color, the transformation of these musical themes,” Burgess said. “Each theme has its own color identity, and those are interwoven throughout the whole light show to show how the structure builds on itself and culminates at the end of the last movement.”

Burgess said she researched Mahler’s piece while working on her master’s thesis, which focuses heavily on the visualization of music. One of her areas of interest — cognition research — shows that pairing audio and visual cues can increase musical understanding, and Burgess said that was a concept she took into account when putting together the recital.

“I’m hoping that with these musical ideas, someone who doesn’t have musical expertise or who hasn’t researched this piece can see emotion being paired in a visual way, and this will help them grasp onto the narrative a little bit more,” Burgess said. “Then it becomes more salient to the audience, and they get more out of the performance.”

Anna Gawboy, associate professor of music theory, said she has helped Burgess along the way, and with today’s media landscape, the pairing of both audio and visual cues is essential and can better grab the audience’s attention.

“Today we are saturated in audiovisual landscape through all of the stuff on our cellphones, we are accustomed to seeing multimedia all around us, and it really is saturating the way that we consume art,” Gawboy said. “What I’ve seen in my symphonic work involving live performers with a media component is that it can really re-engage people who wouldn’t ordinarily go to a full-length concert.”

Gawboy said she is looking forward to seeing everything put together, especially considering how complex the music itself is.

“Mahler’s ‘Symphony No. 1’ has this incredibly rich harmonic language and this really complex formal design,” Gawboy said. “One of the things she’s hoping to do with the lighting component is help the audience perceive this in real time.”

Yasmine Kashubeck, a fifth-year in theater and lighting designer and programmer for the show, said adding a visual component to the performance has helped her take in emotional meanings behind the music.

“As someone who doesn’t have a lot of background in music, it’s kind of hard for me to understand all of the emotions in the piece,” Kashubeck said. “But when it’s able to be projected visually in the lighting, I think that all of the emotional meaning behind the piece can really come out and be more easily recognized by those with no musical background.”

Burgess said the recital is a great way to jump into orchestral concerts, and she is excited for the audience to see the culmination of her work.

“It will be something outside of the typical realm of orchestra performances, and I think it will be really exciting and a good entryway into that world,” Burgess said. “I would encourage people to come and enjoy what we’ve put together.”

The symphony’s recital and accompanying light show is free to attend, and the Hughes Recital Hall will seat up to 300 people on a first-come, first-served basis.