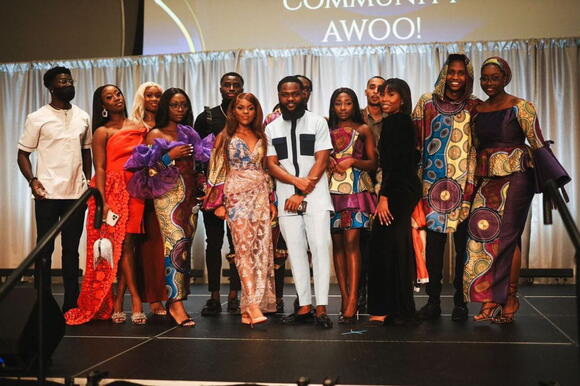 The ambassador council and executive board for African Youth League at their annual event, African Night, Jan. 29. Credit: Courtesy of Fresco Views

With a significant population of students of African heritage at Ohio State, one organization on campus is working to promote resources for these students to connect with their culture.

The African Youth League, a student organization, seeks to bring African culture to the forefront of campus culture through meetings and events, including African Night, a themed showcase of African music, dance and poetry.

Suzan Mchao, a third-year in political science and co-president of the club, said despite an increase in Black students at the university, there hasn’t before been a large community dedicated to African culture.

“Being able to find other Africans who have that specific identity and experiences as you do is hard, but we try to provide that,” Mchao said.

Mchao said since its founding in 1994, the group has promoted unity among Africans.

“The African Youth League is meant to bring the diaspora of African students on campus together,” Mchao said.

Joshua Boamah, a fifth-year in civil engineering and co-president of the group, said in addition to uniting African students, the organization aims to promote and maintain African culture and raise awareness in the community.

“We try to incorporate cultures from all different regions throughout the continent through different general body meetings to even our largest event,” Boamah said.

Boamah said the club offers opportunities for African students to bring their individual country’s cultures together to a greater group.

“We do a lot to make sure everyone is included,” Boamah said.

African Youth League holds general body meetings and annual events, such as Up A Bae, an annual game show event where audience members ask bachelors and bachelorettes a series of questions to determine winning pairs, and proceeds support a philanthropy of choice, according to its website.

The group’s general body meetings, which take place Thursdays at 7 p.m., feature presentations on African cultures, including growing up in an African household , movie nights and trivia, according to the African Youth League website .