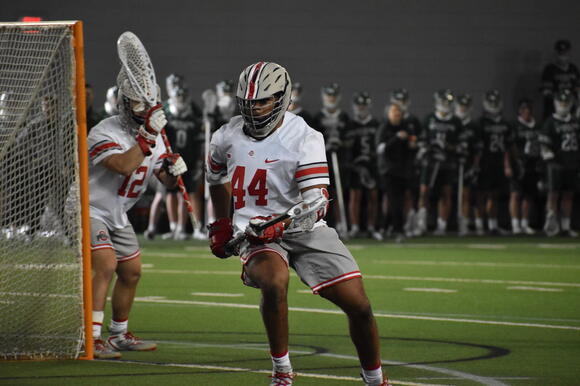 From a graduating class of five or six to a campus of over 60,000 students, Bobby Van Buren found his niche on Ohio State’s men’s lacrosse team.

The nation’s No. 12 overall player and five-star recruit was homeschooled and didn’t play high school lacrosse. Coming to the third-largest college in the United States to be a Division I athlete, the freshman defenseman said he wanted to be a part of an inclusive program where he could thrive.

“One thing they made very clearly to me on my visit here was that I wouldn’t feel racially left out in this program. This is probably the most diverse Division I lacrosse group in the country, easily,” Van Buren said. “We do a lot of things to back that all up. We have, every month, these things called hot seat, where someone of color on our team gets to talk about their experience growing up.”

As the season begins for Van Buren and his teammates, head coach Nick Myers said he sees great growth from the determined freshman.

“He’s adjusting really well and loves his teammates, and his teammates love him each day, and he’s getting more comfortable, and it’s going to be fun to see him as the season goes on,” Myers said.

Senior defenseman Evan Riss said he sees Van Buren come in every day, curious and ecstatic to be at Ohio State with the opportunity to learn from the best in the nation.

“The best thing he brings is his energy. He’s probably the most exciting guy each and every day when he comes into the locker room to see everyone. He’s definitely got a lot to learn. I think that’s why having this veteran group around him to lead him defensively is definitely very beneficial, because we support him and bring that extra knowledge to the game,” Riss said. “It’s just his energy and commitment to learn and commitment to adjust to the game of Division I lacrosse is the thing that excites me most about him.”

In addition to his work ethic, Van Buren said he hopes to continue making the sport more diverse by being a leader and inspiring African Americans to be involved in the sport of lacrosse.

Just alone, four of the 13 members of the 2021 recruiting class were of color, and Van Buren said he has seen a clear path to diversifying the sport.

“We have quite a few guys on our team that are Black and of color, so I feel like me and those other guys, the way that we carry ourselves and show what we can do on the field, will really help inspire the next generation,” Van Buren said. “We have a really special group here, and next year and the year after that we have quite a few more recruits that are also of color, so I think it’s really cool what we are doing here and building a very diverse group.”

As one of the most talented freshmen in the country, Van Buren said he wants to be a face of the sport, with  goals of motivating and inspiring those who come after him.

“When I leave here I want to be the best defender in the country, period,” Van Buren said. “I feel like if that’s a goal I achieve and 95 percent of the lacrosse community agrees upon, I feel like making that known that this guy was the best of the best by the time he left Ohio State, other African American kids will get to see that and that will inspire them to play lacrosse now.”

Van Buren started in the first two games for the Buckeyes and has been a force to be reckoned with if an attackman is nearby. He has collected five ground balls in his two games with Ohio State.

As Van Buren starts off his first season as a student-athlete at Ohio State, he said he hopes to continue his excellence on and off the field, aiming to be a face of the sport.