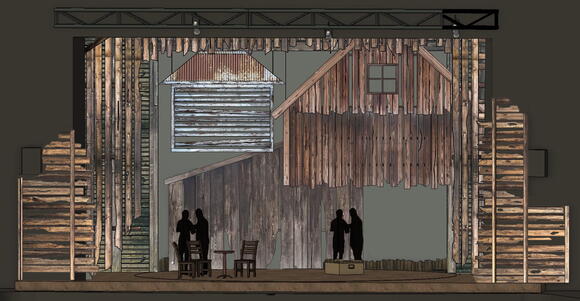 This scenic rendering by graduate MFA designer Braden Graves depicts what the stage is planned to look like for the musical “Violet.” Credit: Courtesy of Braden Graves

The theater department’s last two performances of the 2021-22 season will showcase stories of struggle and new beginnings.

Lynn Nottage’s “ Sweat ,” directed by Tom Dugdale, will grace the Roy Bowen Theatre’s stage March 2-11. The heartwarming musical “ Violet ,” directed by Mandy Fox and based on Doris Betts’ short story “The Ugliest Pilgrim,” will be shown March 31 through April 8 in the Thurber Theatre, according to the department’s website.

Dugdale, an assistant professor of theater, said “Sweat” follows a community struggling to cope with the changing economic environment of its small town.

“In the most basic sense, the play is about how economic uncertainty and loss of jobs leads to fractures in community and fractures in personal relationships,” he said.

Dugdale said the relevance of topics covered in the upcoming play may engage the audience in a unique way.

“Sometimes that’s a bit rare in theater, that something is so realistic and in its own world, but at the same time, there’s the possibility for a really dynamic relationship between the performers and the audience,” Dugdale said.

The theater department has chosen these pieces to allow audience members to relax while simultaneously providing an opportunity to reflect on issues in modern-day society, Fox, an associate professor of acting and directing, said.

“I think we all need to take a breath and need something real,” Fox said.

Fox said this philosophy will extend to the musical “Violet,” which follows a young girl — whose face was disfigured in an accident — as she travels across the American South searching for a miracle. The musical will play host to a variety of musical genres such as R&B, gospel and country, Fox said.

One of the main struggles actors and producers will face this semester is navigating pandemic-related restrictions during rehearsals and performances, Fox said. Unlike last semester’s mask exemption allotted to performers, Fox said masks will continue to be worn through in-person rehearsals and during the final performances.

“We are going to be rehearsing over Zoom for a couple of weeks,” Fox said. “And then we’ll meet in the theater and say, ‘Oh my gosh, hello, you’re a real person!’ Fully masked, every moment.”

From the selection of the content to the final curtain call, those involved with the two productions will continue to wrestle with how to best translate live theater for the modern audience, Fox and Dugdale said.

“We have some really good, raucous fun,” Fox said. “But it has some real meat in it.”

Although they are not yet on sale, tickets to “Sweat” and “Violet” — which will both be shown at the Drake Performance and Event Center located at 1849 Cannon Drive — will be available online through Ticketmaster , over the phone at 614-292-2295 and in person at the department’s ticket office.