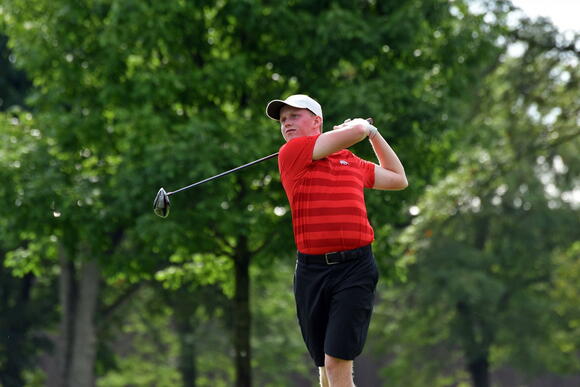 Entering the first outing of the spring, Ohio State sophomore golfer Maxwell Moldovan was looking for his sixth top 10 finish of his career. However, that goal was not enough to satisfy the sophomore.

Moldovan earned his first career No. 1 finish at the NEXUS Collegiate Classic at the Albany Resort in New Providence, Bahamas, Monday through Wednesday. The Buckeyes placed second overall out of nine teams in the tournament.

Moldovan never fell below fourth in the outing and held first place for the final two rounds. He said he credits his offseason practice as something that got him the victory.

“To start the spring season and see myself come out with the victory is a really great feeling and just a testament to what hard work can do,” Moldovan said.

The Buckeyes led the field with 37 birdies and finished the tournament 50-over-par — just three strokes behind first-place Auburn.

Ohio State got off to a quick start Monday, taking a three-stroke lead after the first round. Sophomore golfer Adam Wallin held first place individually after a back nine in which he made four birdies and an eagle.

A windy second round saw the Buckeyes fall behind Auburn for the first time in the tournament, losing by three strokes and ending Tuesday with an overall score of 32-over 315.

Moldovan, who was tied for fourth entering Tuesday, fought through the conditions and secured the No. 1 spot. Head coach Jay Moseley said Moldovan is consistent and effective, especially in his drives.

“Max has strength all across this game,” Moseley said. “Certainly he can get it in play off the tee as good as anybody in the country in college golf.”

Moldovan finished the final round scoring 5-over 77. The Buckeyes held second place with a score of 32-over 306 Wednesday, and Wallin finished the tournament tied for seventh individually.

Moldovan said the second place finish in the spring’s first tournament will motivate the team to achieve higher goals as the weather starts to warm up.

“It gives us a huge amount of confidence for what we can do this spring, especially when the weather starts getting good and we get to get out and go outside more,” Moldovan said.