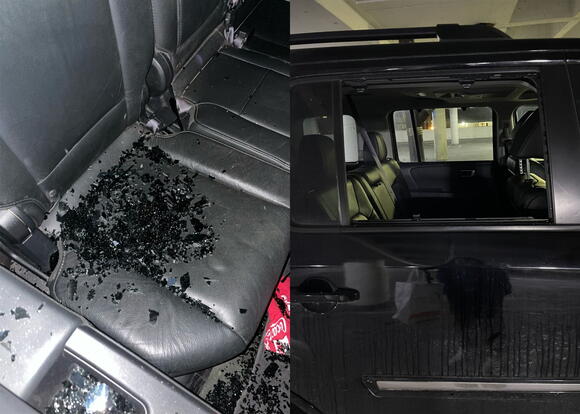 At least 15 people have had their cars broken into or stolen from inside Ohio State’s Arps Garage from Feb. 7-17. Credit: Courtesy of Ila Sharma

Ila Sharma thought she had left her window rolled down when she returned to her car in Arps Garage after a rehearsal Monday,  but upon closer look, she found her vehicle had been broken into.

Her car window had been shattered, with glass laying on the seat. And Sharma, a third-year in music composition, isn’t the only student to have experienced a car break-in recently. University spokesperson Nicole Holman said from Feb. 7-17, at least 14 cars in Ohio State’s Arps Garage were broken into or stolen from.

Sharma said although her car was damaged, nothing was stolen.

“They completely cleaned out the window frame,” Sharma said. “I don’t leave anything in my car, but they rooted around my … center console.”

Sharma said she parks at Arps Garage — on College Road and West 18th Avenue — on occasion to avoid walking home alone in the dark. She said after she found her car damaged, she flagged down a nearby police officer to file a report.

“The only thing they could do is just dust for prints, and that wouldn’t be very helpful because they would pretty much only find mine and anyone else who has been in my car,” Sharma said.

Sharma said the cost of repair for her car is anywhere from $200 to $300, and she will not get it back until Wednesday.

Guy Carollo, a second-year in business, said he parks in Arps Garage overnight. On Feb. 10, he said his car window was smashed and the contents of the center console and glove compartment were looted through, but nothing was stolen.

“While I was in the garage, there were three other people who were part of one group who had their car broken into the same way mine was,” Carollo said. 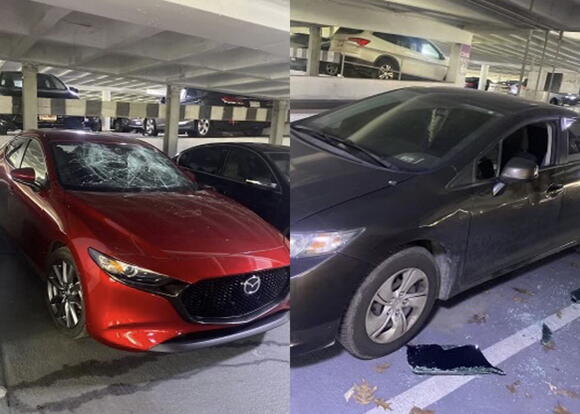 It will cost about $330 to repair his car, Carollo said.

Sharma said she thinks the university should install cameras in the parking garages to avoid situations such as this in the future.

“I just found it ridiculous that there were no cameras in the parking garages, considering how much money has been allocated to our quote-unquote safety budget,” Sharma said.

Holman said Ohio State has thousands of cameras on campus, and parking garages are regularly patrolled. She said the university is working to install additional cameras in numerous areas, including parking garages.

Carollo said because he has a parking pass, he will continue parking in the garage for the remainder of the semester, but he will park at his off-campus house next year.

These break-ins have other students concerned for their cars as well.

Florencia Nugroho, a second-year in psychology, said she’s worried that if something happened to her car, the university wouldn’t be able to help her.

“I don’t think they have the resources to go and find whoever did it or reimburse me or anything,” Nugroho said.

Nugroho said hearing about the additional cameras being added has somewhat eased her concerns, but she’s not convinced thefts will decrease without continuous monitoring of the efficacy of these safety-oriented policies.

“You can put as many policies into place as you want, but if you don’t actually seek out and prioritize all those, then nothing’s going to get done,” Nugroho said.