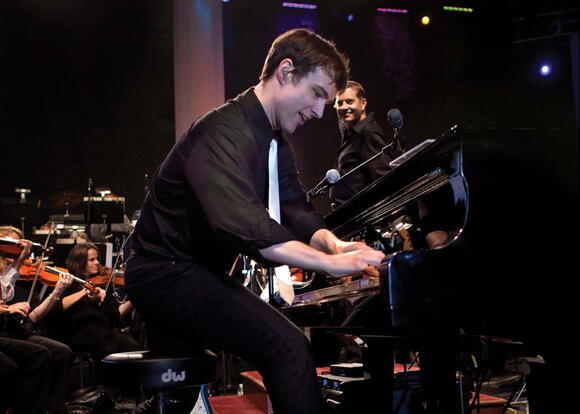 After two sold-out performances with the Columbus Symphony, Grammy- and Tony-nominated musician Michael Cavanaugh will return for a concert celebrating the season of love.

The Columbus Symphony will present “Michael Cavanaugh — Music of the Great Singer Songwriters” at the Palace Theatre, located at 34 W. Broad St., Saturday at 8 p.m. The event will include the greatest hits from acclaimed singers, including James Taylor, Simon and Garfunkel, Neil Diamond, Paul Simon, Elton John and Billy Joel, according to a Jan. 19 press release, with all attendees receiving free chocolates and a rose.

Cavanaugh has a long history with music and said beginning at the age of 12, he performed 4-5 nights a week in his hometown of Cleveland.

“It taught me a lot about what it takes to be a performer,” Cavanaugh said. “I really learned how to work a crowd.”

According to his website , Cavanaugh began performing at a piano bar in Las Vegas in February of 2001, where he said he caught the eye of singer-songwriter Billy Joel, who then chose him to star in the Broadway musical “Movin’ Out.”

“Billy Joel’s tour manager brought him to the piano bar to hear me play, and, of course, I nearly had a heart attack,” Cavanaugh said. “He really liked me, and at the time I had no idea there was a big Broadway show being planned showcasing all of his music, and they wanted me to be the piano man. It changed my life completely.”

Since then, Cavanaugh said he has been touring the country performing his own selection of pop and rock music. He began working with symphony orchestras such as the Indianapolis Symphony Orchestra and the Columbus Symphony. He said he cannot imagine a better lifestyle.

“Some people listen to music to relax. The one thing I can’t do is relax with music, even if it’s mellow, because I am immediately analyzing it, taking it apart and trying to learn it,” Cavanaugh said. “I eat, breathe and sleep it, and this is what I was born to do.”

Cavanaugh said he is looking forward to putting on another performance with the Columbus Symphony and that the audience can expect a lively show.

“We’re going to have a lot of fun; it’s going to be very interactive, which they might not expect from a symphony show, but that’s the way we do it,” Cavanaugh said. “It’s going to be a great mix of music, and we’re going to give it everything we have.”

Andrés Lopera, associate conductor for the Columbus Symphony, said he has worked with the symphony since 2018. For the Valentine’s Day-themed performance, he said the group will stray from its regular classical music and perform fun, lighthearted American classics.

“Some of the pieces I’m most excited for are ‘Your Song’ by Elton John, ‘Sweet Caroline’ by Neil Diamond and ‘Blackbird’ by The Beatles,” Lopera said.

Although he said he has not worked directly with Cavanaugh before, Lopera said the concert is sure to be a treat.

“The audience can expect a perfect marriage between pop music and orchestra music,” Lopera said. “We will join together to enjoy the music and celebrate love.”

According to the Columbus Association for the Performing Arts COVID-19 safety guidelines , masks will be required inside the Palace Theatre in addition to proof of vaccination or a negative test result within 72 hours.

Tickets for “Michael Cavanaugh — Music of the Great Singer Songwriters” start at $35 and can be purchased in person at the CBUSArts Ticket Center, located at 39 E. State St., on the CBUSArts website or by phone at 614-469-0939.