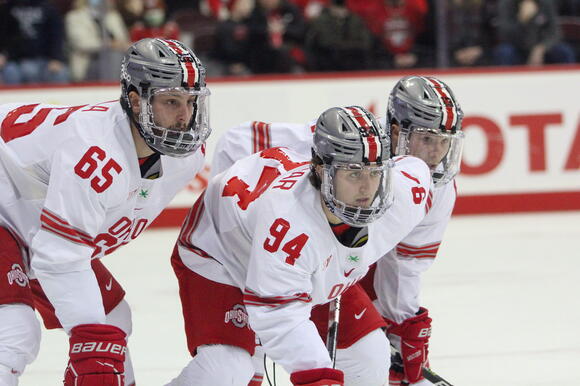 No. 8 Ohio State will end its regular-season home schedule Friday and Saturday against No. 7 Minnesota.

The Buckeyes (21-7-2) will have a slight personnel advantage over the Golden Gophers (17-11), who currently have three skaters representing Team USA at the Olympic Games in Beijing: sophomore defenseman Brock Faber and two forwards, junior Ben Meyers and freshman Matthew Knies.

Ohio State head coach Steve Rohlik said Minnesota is one of the nation’s best teams even without three of its best weapons.

“They have a lot of other really good players that are coming down here this weekend,” Rohlik said. “We have to be prepared.”

Two Minnesota players who Rohlik and his crew will have their eye on are seniors defenseman Ben Brinkman and forward Sammy Walker. During Minnesota’s sweep of Michigan State Friday and Saturday, Brinkman scored his first goal in 153 games while Walker netted two goals and drew a penalty during a minute-and-a-half stretch in the third period of game one.

Rohlik said his attention remained on the Golden Gophers as a team, rather than focusing on two individuals.

“We can’t worry about one or two guys — we’ve got to worry about their whole team,” Rohlik said. “They’re dangerous up and down their lineup and once you start concentrating on one guy, the rest will bite you.”

This weekend won’t be the first time the Buckeyes and the Golden Gophers have shared the ice this season. Ohio State and Minnesota split an earlier series Nov. 12-13, 2021, in Minneapolis, with the Buckeyes winning the first game 4-3 and the Gophers taking the finale 2-0.

This weekend’s series will be the final two home games of the regular season for Ohio State. But the Buckeyes will host one of the first round matchups in the 2022 Big Ten Tournament March 4-6.

Adding to the importance of the weekend is that Saturday’s game will host Ohio State’s Senior Night festivities. Graduate defenseman Grant Gabriele will find himself in a familiar spot during the send-off, as he underwent the same farewell almost a year ago to the day before deciding to return to Ohio State for a fifth year.

“It’ll be a little bit better this year just with parents being able to come on the ice,” Gabriele said. “I’m looking forward to it.”

Ohio State and Minnesota will play Friday at 6:30 p.m., with the rematch scheduled for Saturday at 6 p.m. Both games will air nationally on Big Ten Network.