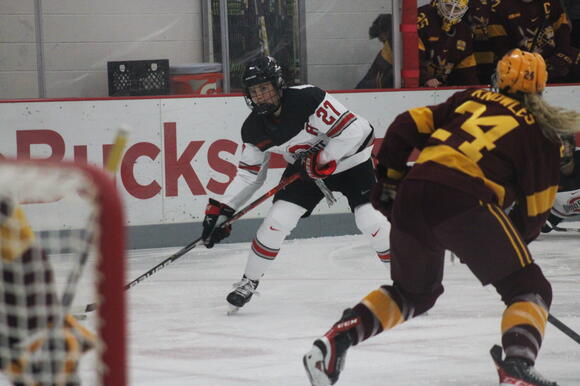 No. 2 Ohio State will conclude its five-game road trip against Bemidji State in the Buckeyes’ last road trip series of the regular season in Bemidji, Minnesota.

The Buckeyes (22-5-0) have won their last three games on the road against Minnesota State and St. Cloud State. The Beavers (10-15-3) are coming off of two losses against No. 1 Minnesota Friday and Saturday.

Muzerall said the Beavers are a good team and the Buckeyes need to be prepared to battle them.

“You can’t take any team in this conference lightly,” Muzerall said. “We just have to make sure that we are prepared from the drop of the puck.”

Ohio State graduate forward and captain Liz Schepers said the Beavers always give the Buckeyes a hard time, and Bemidji State has improved since Ohio State beat it earlier in the season.

“They are a team that takes a lot of pride in playing good defensive hockey and blocking a lot of shots,” Schepers said. “They always make it difficult for us to get to the net and get ourselves through, so it’s been a big focus for us.”

Ohio State senior forward Paetyn Levis said Bemidji State is a talented team and Ohio State will need to play a powerful series to beat it.

“Bemidji’s a very big, strong, fast team,” Levis said. “I think they have a lot of skill on their team and they use it wisely.”

Bemidji State freshman forward Claire Vekich was named the Western Collegiate Hockey Association’s January Rookie of the Month and has scored seven goals for the Beavers this season.

Schepers scored four goals for the Buckeyes Tuesday against St. Cloud State, making her the sixth player in the NCAA this season to do so. She said going into this series, she is focusing on playing her game simple and within the team’s systems.

“Whatever happens on the production end happens,” Schepers said. “But it’s definitely a good feeling coming down the end of the season to be getting a couple good bounces.”

Ohio State sophomore goaltender Amanda Thiele has stepped up while Ohio State senior goaltender Andrea Braendli competes in the 2022 Olympics for Team Switzerland. Thiele ranks second in the nation with a 0.833 win percentage.

Ohio State senior forward Sophie Jaques is first in the nation with nine power-play goals. She is also second in the country with 1.74 points per game and third with 1.15 assists per game.

Levis said the Buckeyes must focus on skating fast, being physical on the puck and playing together as a unit of one.

“Being tenacious on the forecheck is really going to help us this weekend,” Levis said. “Just being relentless all over the ice and using our speed and our skill will be important this weekend to beat them as well.”

Puck drop is scheduled for 7 p.m. Friday and 4 p.m. Saturday. The series can be streamed on Big Ten Plus.