Howl at the Moon: Nightlife venue makes name for itself with live music, themed events 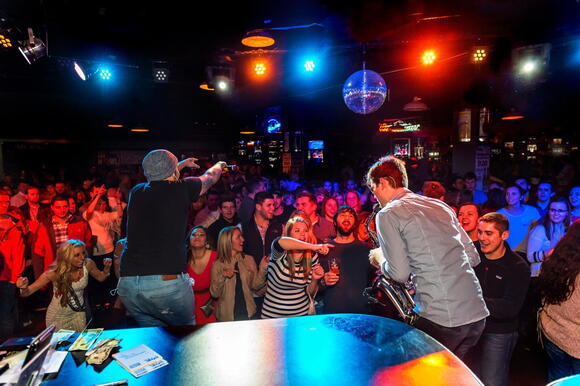 Since its opening in early November, Howl at the Moon has grown in popularity — especially among Ohio State students.

First established in Cincinnati in 1990, Howl at the Moon swaps a typical bar scene for high-energy, live musical performances, featuring hits from different decades, according to its website . Howl at the Moon has since opened locations in 15 cities across the country, including Boston, Chicago, Denver, Indianapolis, Orlando, Florida, and now Columbus at 504 Park St.

Nate Ancheta, bar manager for the Columbus location , said he’s excited to give the people of Columbus a new interactive nightlife experience.

“We are a live music venue that caters to all walks of life because music is so universal,” he said. “A lot of the bars have DJs, but we are strictly live music, and I think the community really needed something like that.”

Although Howl at the Moon draws in a diverse range of customers, Ancheta said the venue has become increasingly popular among college students, and approximately a third of its customers are students from Ohio State.

“Thursday nights are especially popular for college students because it’s College Night,” Ancheta said. “The word is getting around that we have great specials.”

Outside of happy hour deals like the ones available during College Nights , Howl at the Moon remains a popular destination because of its unique drinks , such as the Funky Monkey and Pink Paradise, Jessica Brockway, sales and event manager for Howl at the Moon, said.

“The drinks are attractive to look at because they are fun and colorful; there is literally a whole rainbow of drinks to choose from,” she said. “A lot of our guests post photos of their buckets on Instagram, and we love reposting them on our account.”

Brockway said Howl at the Moon also uses social media to showcase various happenings — such as bachelorette parties, team outings and corporate events — which can be booked at the venue any day of the week, according to its website.

“We are a destination bar,” Ancheta said. “There is always someone celebrating something here, especially because our venue is so big.”

One of the most popular reservations at Howl at the Moon is the Happy Hour party . Ancheta said guests can sign up to be placed on the venue’s list for the chance to win free admission, as well as food and drink specials for themselves and up to 100 of their closest friends on a night of their choosing.

Howl at the Moon also hosts special themed events, which are open to the public each month, Ancheta said. In honor of Valentine’s Day, he said the next event will be the “Love Rocks” Valentine’s Day Party Friday and will feature Pink Whitney specials and rock music.

Next month, the venue will participate in two bar crawls themed around St. Patrick’s Day.

“These events keep it fun and give people an excuse to wear a costume to a bar,” Ancheta said.