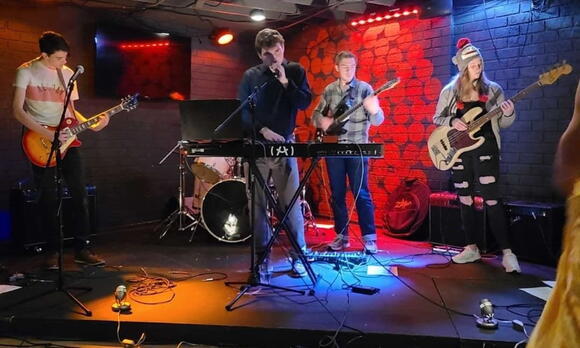 Those who have experienced nightlife around Ohio State may grow tired of the genres frequently played at house parties and bars — and one student band offers a solution.

The quintet originated from a student organization called the Musicians’ Collective — a group open to all students looking for a place to express themselves musically, according to its organization page . The band took off during the fall 2021 semester, covering indie and alternative rock songs at events around the campus area, Moskowitz, a fourth-year in logistics management, said.

“It’s been wild being part of a group, up on stage,” Thacker said. “It’s intimidating at first, but it’s so cool to see a whole room of people engaged and watching what we do.”

Petz, a third-year in astrophysics and astronomy, said the idea for the band’s name came about during one of the group’s practices when some members began complaining about the on-campus parking administrator, CampusParc.

Later, when asked to write down the band’s name at a 2021 Halloween performance, one of the members quickly jotted down “Campus Park,” Petz said, and the name has stuck ever since.

Each member of the group had experience with their respective instruments before the band was formed, Manner, a third-year in music, said.

Manner had been playing guitar for six years prior to the band’s formation and said although each member of Campus Park is a talented musician on their own, they quickly adapted to playing well with one another.

“It’s been great playing with these guys,” Manner said. “I really feel like I’ve grown as a guitarist.”

True to its genre, the band tends to lean toward crowd-favorite rock songs, such as “R U Mine?” by Arctic Monkeys and “Last Nite” by The Strokes, Manner said. In addition to songs from bands such as the Red Hot Chili Peppers and Muse, he said Campus Park is in the process of putting out its first original repertoire.

Petz said the band tries to plan its concert setlists intuitively, choosing familiar favorites that the members think the crowd will enjoy.

“We get together as a band and try to pick songs that the group will do well playing, and mostly that people there would know,” Petz said. “It’s such a different experience than playing by yourself.”