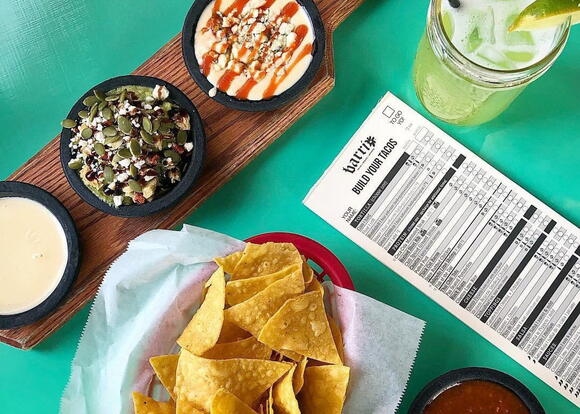 Cleveland-based taqueria Barrio Tacos offers drinks, chips and tacos and is set to open a location across from Ohio State’s campus in late spring of 2022, after its initial summer 2021 opening date was delayed. Credit: Courtesy of Barrio Tacos

Barrio Tacos, a Cleveland-based, build-your-own taco and cocktail spot, is set to open its second Columbus location across from Ohio State’s campus.

The company’s 13th national location is set to open in late spring after its initial summer 2021 opening date was delayed. The restaurant will occupy the ground level of the 15th+HIGH development on North High Street almost a year after the originally scheduled opening date .

During the construction process, Barrio Tacos maintained a presence at Ohio State by contracting with Levy Restaurants, which oversees the food and beverages at Ohio Stadium and the Schottenstein Center. Beginning in March of 2021, Beudert said Barrio Tacos began periodically hosting a food truck at various campus happenings, including Greek Life events, in addition to running a food stand inside the stadium at home football games.

As of Jan. 18, Beudert said the Barrio food truck — typically located near the RPAC — has extended its hours on campus to be a part of students’ dining options five days of the week. The truck is currently open on Monday from 12-4 p.m., Tuesday through Thursday from 4-8 p.m. and Friday from 12-4 p.m.

“It’s been a hit, and we’re excited to keep that truck on campus throughout the winter, and hopefully beyond,” Beudert said.

Mallory Smith, a fourth-year in psychology and Spanish, said for Ohio State students with meal plans or BuckID cash, the Barrio Tacos campus food truck allows students to diversify their meal options while maintaining the convenience of on-campus dining.

“My younger sister’s a freshman, and I know she’s been using the food truck and is always excited when it’s there,” Smith said. “I know she and her friends always get really excited because it’s very convenient. And it’s just a nice switch-up from the regular dining hall food.”

The restaurant gained attention from students after its initial Columbus location opened at 1416 W. Fifth Ave. in 2020. However, Beudert said he expects the new location, which is closer to campus, to draw more of a student crowd during its opening in late spring and beyond.

“I think it will be a success for sure,” Smith said. “One, because I feel like there’s a large Cleveland population at Ohio State. And I think the location’s really good, especially for underclassmen who are in dorms without cars. And then I think also for older people that can go and just get drinks and can walk. So, I think it’ll get all kinds of freshmen through seniors.”