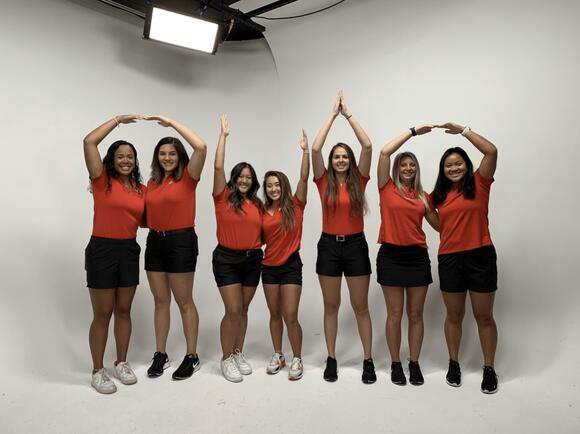 Coming off a moderately successful fall, the women’s golf team gears up for a challenging spring season. Credit: Courtesy of Ohio State Dept. of Athletics

The team had two top 10 finishes out of four tournaments in September and October, its best result being a sixth place finish out of 15 teams at the Mason Rudolph Invitational in Nashville, Tennessee.

Strom said Ohio State will be led not only by veterans like seniors Aneka Seumanutafa and Skylar Thompson, but new golfers as well.

“We’ve got a lot of great young players that kind of just step into their roles and do the job,” Strom said. “They’re leading by example, and it’s very refreshing when you get younger, classic kids that get what it takes to push themselves.”

One of those young players is freshman golfer Faith Choi. A native of Frederick, Maryland, Choi begins her first spring with the Buckeyes after a fall season in which she shot on average 74.33, which ended as the fourth-best score on the team.

Choi said she credits her teammates for helping her become familiar with college golf in her first season, especially having been homeschooled.

“They’ve been a really big help for my transition from playing junior golf and for being homeschooled my whole life to come to this big school and play collegiate golf,” Choi said. “They’ve really been there for me at the hardest times.”

Choi said Strom has prepared the golfers for those tough times this season as they prepare for their six regular-season tournaments.

This will be the team’s first season in 30 years without Therese Hession, former director of golf for the men’s and women’s teams.

Hession was head coach of the Ohio State women’s golf team from 1991-2018, winning 11 Big Ten Championships, two NCAA Coach of the Year honors and being inducted into the Ohio State Athletics Hall of Fame in 2015.

Hession was elevated to director of golf in 2018 and retired from that position on Jan. 7.

Strom, who played under Hession at Ohio State from 1995-99, said her former coach had an effect not only on her players, but on Ohio State golf as a whole.

“We owe her just such an enormous amount of gratitude and praise and just for her vision and what she was able to bring to Ohio State golf,” Strom said.

Ohio State follows their Big Ten opener in Palm Harbor with the UCF Challenge in Orlando, Florida. The Buckeyes will then compete in the Westbrook Invitational in Peoria, Arizona, before traveling to Palos Verdes Estates, California, for the Northrop Grumman Regional Challenge.

Northrop Grumman is a tournament in which the Buckeyes have competed for over 25 years. Choi said the team recently visited the course and is looking forward to playing on the challenging course, one of the most difficult she’s played.

The team rounds out the regular season at the Ironwood Invitational in Greenville, North Carolina, before returning to Columbus for the Lady Buckeye Tournament at the Ohio State  Golf Club’s Scarlet course April 15. This will be the final match for the Buckeyes before the Big Ten Tournament, which begins April 22.

With the season starting in under a week, Strom said she is looking forward to what her team can accomplish.

“I think we’ve got a lot of exciting things in store,” Strom said. “I think we’re really gearing up for a great stretch run here and then in the postseason.”

Correction: Hession did not step down from coaching in 2018 but was elevated to director of golf.  The story has been updated to reflect this information.