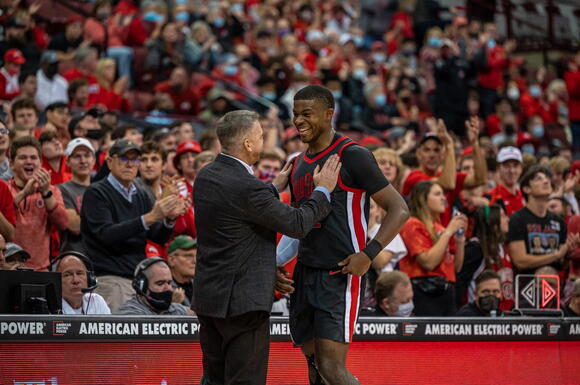 On a night where junior forward E.J. Liddell scored his 1,000th career point and Chris Holtmann earned his 100th win as the Buckeyes’ skipper, No. 16 Ohio State prevailed over Minnesota 75-64.

Alongside his milestone, Liddell picked up his second consecutive double-double behind 23 points and a career-high 15 rebounds. Liddell also got his teammates involved, dishing out five assists.

Liddell’s rebounding efforts helped the Buckeyes bully Minnesota on the glass, where they out-rebounded the Golden Gophers 48-22. Ohio State collected 20 offensive rebounds, which it turned into 27 second-chance points.

Graduate forward Kyle Young was key down the stretch for the Buckeyes, scoring eight of his 14 points in the second half — including a run of eight straight points during the middle stages of the frame.

Minnesota saw its leading scorer and sophomore forward Jamison Battle — who averaged 18 points entering Thursday’s game — struggle out of the gates as he scored three points on 1-for-9 shooting in the opening frame. Despite his adverse start, Battle found a groove in the second half, finishing with 15 points.

While Battle could not get into a rhythm early, freshman guard Malaki Branham kept the Buckeyes’ offense alive early in the game, scoring nine of Ohio State’s first 11 points. Branham finished the game with 11 points and six rebounds.

While Ohio State controlled the glass, it also held it down in the paint — outscoring the Golden Gophers 40-26 in the painted area. But, the Buckeyes struggled to find their range, shooting 26 percent from 3-point range.

The Buckeyes head to Mackey Arena Sunday to take on No. 6 Purdue with tip-off set for noon. The game will be televised on CBS.