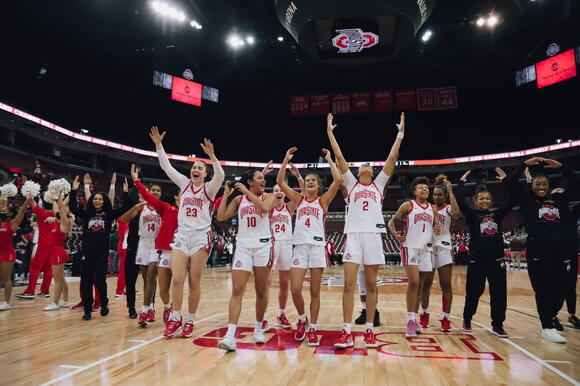 The Buckeyes (15-3, 7-2 Big Ten) look to push their win streak to seven games Thursday against No. 7 Michigan (17-2, 8-1 Big Ten). Freshman forward Taylor Thierry said this Ohio State team has grown since the previous matchup against the Wolverines.

“I think we learned a lot from the last time we played Michigan. We were watching film a lot just to make sure that we were doing as much as we can to get better and work on what we need to work on,” Thierry said. “I think we’re a different team than we were when we played Michigan the first time and I think we worked hard.”

Thierry played a key role in Ohio State’s most-recent win over Rutgers, scoring all five of her points in the fourth quarter while collecting six rebounds. The Cleveland native earned the “dub chain” for her performance Sunday.

Head coach Kevin McGuff praised Thierry and graduate forward Tanaya Beacham for the versatility they bring to the program.

“We needed their athleticism, their toughness, because Rutgers is a really athletic team,” McGuff said. “They were very instrumental in our win.”

Wolverines senior forward Naz Hillmon will be the one to stop. The Cleveland native is averaging 20.2 points and 8.8 rebounds per game. Against the Buckeyes in December, Hillmon accounted for 29 points and 15 rebounds.

While stopping Hillmon will prove to be another tall task for the Ohio State defense, McGuff expressed pride at how much the Buckeyes have grown since the last time they saw her.

Historically, the Buckeyes are dominating the rivalry 57-15, and in 35 Columbus matchups, the Wolverines have only won five times.

Senior guard Taylor Mikesell was named to the Big Ten’s weekly honor roll Monday after two stellar performances against her former team — then-No. 12 Maryland — and Rutgers. The 5-foot-11 guard accounted for 54 points, including 24 of those points from downtown.

While the Buckeyes seek revenge against their rival, McGuff said a win Thursday would be monumental for the program.

“This is a big rivalry,” McGuff said. “We certainly have a lot of respect for the program and the season that they’re having right now and the talent that they’ll have on the floor tomorrow night, but it’s always a big game and I think our kids are excited to play, and hopefully we put our best foot forward.”

Ohio State tips off at 7 p.m. against Michigan at the Schottenstein Center. The rivalry will be streamed on Big Ten Network.