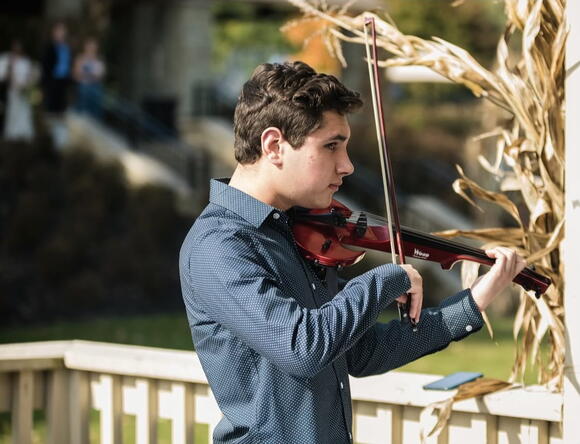 Brandon Hoff performing “All of Me” by John Legend at a wedding in October of 2020. Credit: Courtesy of Shannon Stevens

At just 10 years old, Brandon Hoff picked up a violin and fell in love.

Just a few years later, Mark Wood — the inventor of the first solid-body electric violin and world-leading rock violinist — inspired him to purchase the instrument so he could take his playing to the next level. Hoff said the electric violin allowed him to branch out from classical music and explore a whole new repertoire of rock songs, such as “Crazy Train” by Ozzy Osbourne and “Sweet Child O’ Mine” by Guns N’ Roses.

“I will say I was pretty average until seventh grade, when Mark Wood came to visit my school and inspired me to take the next step,” Hoff, a second-year in biology, said. “That’s when I bought one of his electric violins, and my music really took off from there.”

Hoff, who is also a member of Delta Sigma Phi, said despite his intensive studies as a pre-med student and obligations with his fraternity, he takes time to craft his music and make it a priority in his life.

In November 2021, Hoff was able to perform at Delta Sigma Phi’s block party before an Ohio State football game.

“I played a selection of rock music including ‘Mr. Brightside’ by The Killers and ‘Bohemian Rhapsody’ by Queen,” Hoff said. “I don’t think the crowd was expecting a violinist to rock out and play popular music.”

Casey Welker, a second-year in health sciences and Hoff’s close friend and fraternity brother, was present at the performance and said it shocked the crowd.

“Everyone was in awe; none of us had heard an electric violin before,” Welker said. “Our jaws were on the floor.”

After the performance, Hoff said he sent video footage to Wood to showcase his talent on the instrument Wood created. Robert Gillespie, an emeritus music professor at Ohio State and a friend of Wood’s, said he called Wood in search of a musician who could help in an upcoming international teacher workshop in the Columbus area.

“I was looking for someone who could be personable with the teachers, perform for them and help refine their skills on string instruments,” Gillespie said. “Mark mentioned Brandon, saying he was an extremely talented violinist who could show the teachers new skills.”

Gillespie said the workshop will be held in the summer with both live and virtual components. He said there are typically 100-200 teachers who attend, with several coming from abroad.

Gillespie said he is excited to work with Brandon, who he believes to be a pioneer in his specialty.

“I reached out to him and he got back right away,” Gillespie said. “The future of string music is electric, and I look forward to meeting him in person.”

In the future, Hoff said he hopes to get more involved on TikTok and YouTube so he can grow his audience.