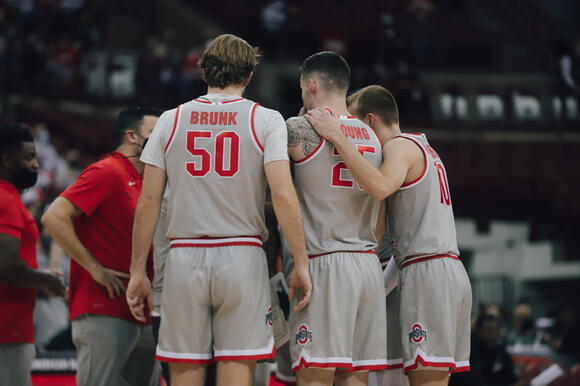 “Definitely want to go there and get a dub against a good team,” junior forward E.J. Liddell said. “Their record in the Big Ten might not reflect and people might not think they’re a great team, but they are a really good team. They can compete with anyone.”

The Golden Gophers (11-5, 2-5 Big Ten) hope their next matchup with the Buckeyes will be another barnburner after narrowly losing to Ohio State in the second round of the Big Ten Tournament last season.

“They’re a really good team. I also don’t like the floor; it’s kind of elevated,” Liddell said. “The floor is kind of hard, but you got to adjust in those situations. Minnesota, they play really well on their home floor, just like a lot of teams in the Big Ten.”

This time around, new faces comprise Minnesota’s roster. Carr has since transferred to Texas, while sophomore forward Jamison Battle joined the program from George Washington University.

Battle leads a trio of double-figure scorers, averaging 18 points per game and shooting 47.8 percent from the field. The 6-foot-7 forward earned All-Conference Third Team honors in the Atlantic 10, and head coach Chris Holtmann said Battle entered the Big Ten at a high level.

“He has good positional size and versatility, but he can really, really score the ball,” Holtmann said. “He was able to be really productive at a really high level of play. I think that’s allowed him to transition here well.”

In preparation for their first Big Ten game in 11 days, Liddell said the Buckeyes have focused on staying sharp. However, Holtmann said some players haven’t consistently practiced recently.

Ohio State’s defense was a hinge point in its last two victories, holding Penn State to a 38.6 shooting percentage and IUPUI to a 19 percent clip in the second half. Perhaps the Buckeyes’ offense will need to play to its No. 5 Big Ten rank, averaging 75.1 points per game, but will be challenged by Minnesota’s No. 5 defense — holding opponents to 66.3 points per game.

Liddell enters Thursday on a 27-game streak of double figures with a significant milestone on the horizon: he’s 12 points shy of 1,000 in his Ohio State career.

To this point, Liddell said no other 1,000-point scorers in Buckeye history have reached out to him, but he anticipates they will soon after he passes the benchmark. More importantly, though, he hopes he’s remembered for his character more than his play.

Not only is Liddell on the doorsteps of a milestone, but Holtmann is, as well. A victory Thursday will give the fifth-year Buckeyes head coach his 100th win at Ohio State and No. 214 during his entire 11-year career as a skipper.

Holtmann said Minnesota will present a “big-time challenge” for a readied Buckeyes team expecting a test.

“Myself and unfortunately our teams, we’ve struggled at The Barn,” Holtmann said. “We played teams that have been ready to play. Bottom line is, we got to expect a great environment, a really good team, and need to be ready to play.”

Minnesota and Ohio State will meet for the first time this season Thursday at 8 p.m. ESPN will broadcast.