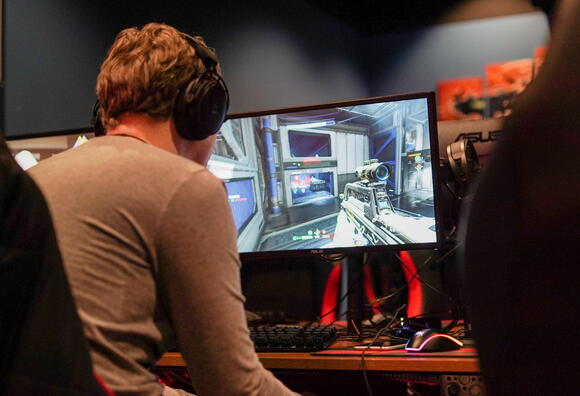 For Caleb Monk and Deepesh Patel, video games have always been a part of life.

But it wasn’t until Halo Infinite was released that they saw themselves entering the competitive video game scene. Monk, a fourth-year in new media and communication technology, said he has always been involved with esports, but Halo is what inspired him to manage a team.

Monk said he recruited Patel to the Buckeye Gaming Collective in August 2021. From there, Monk said Patel has done great in managing his responsibilities and has been a great figurehead on the team.

“I was like, ‘Hey, Deepesh, do you want to be my broadcast manager?’ At that moment, that kid took it and he has ran with it,” Monk said. “He is just a natural leader and then he’s the one who actually came to me about the Halo team.”

Patel, a second-year in political science, said the collective tried to set up a team, but the unexpected release date for Halo Infinite expedited their efforts.

“We originally knew we wanted to try and start up a team,” Patel said. “We didn’t know the game was going to be released a month earlier than it was supposed to.”

Patel said he’s grateful tryouts went well for the team and this all originated from fellow Buckeyes wanting to play Halo together.

“Thankfully, we were able to get enough people to participate in the tryouts to get accurate representations of skill levels,” Patel said. “The team just started because people wanted to play Halo at OSU competitively.”

Patel said he hopes he can continue to maintain a positive yet competitive environment on the newfound team.

“We’re just hoping to create a good team dynamic. We have a good team setting between all the players here and we have a friendly, fun atmosphere,” Patel said. “It’s also a competitive atmosphere where we want our players to be able to go out there and to be able to compete against some of these higher-tier schools that are currently performing really well in the collegiate Halo league.”

This year’s Halo team is filled with plenty of competitive experience, Patel said.

“One of our players has been playing competitively for the last 10 years,” Patel said. “Another one of our players, he’s played since Halo 2 tournaments and stuff like that, so I’m excited.”

The Halo team had its first scrimmage Tuesday and won 3-0 against Marshall University.

The relationship between Monk and Patel, unique in that they started a team together, has been beneficial on and off the sticks.

“It’s super weird because this really hasn’t happened a lot in college, and at least in the gaming space,” Monk said. “We’ll just play games together all night.”