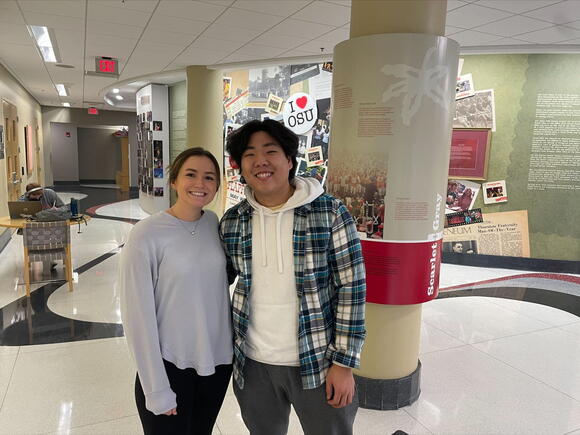 Every Sunday, Nikki Huber and Alex Choi play sports with children with disabilities, building friendships along the way.

RallyCap Sports is a student organization that puts on sporting events for children with disabilities. Ohio State’s chapter offers sports such as basketball, soccer and baseball — creating a gratifying experience for participants and volunteers alike.

“I found that RallyCap gave me the perfect opportunity to have one-on-one interactions with the kids and really develop the relationship over a couple weeks,” Huber, a fourth-year in health science and former RallyCap president, said. “Seeing how much they look forward to being with us has been one of the more special parts of being a part of RallyCap.”

Huber said her biggest role model and inspiration to join RallyCap is her younger sister, who has down syndrome.

Noah Mertz, a member of RallyCap, said he is involved in almost every event the group hosts, whether it is dancing, basketball or football. Mertz, who has autism, is a social butterfly who loves to be around people and participate in activities with others, Joe Mertz and Shannon Mertz, his parents, said.

Joe Mertz said his son enjoys being a part of a team and having fun with both his friends and the leaders of RallyCap.

“Just that hour or hour and a half that we get to escape and let him be a part of team and have fun and run around and get exercise,” Joe Mertz said.

Huber said she finds her mood improves every time she volunteers for RallyCap.

“I would say that it is probably one of the most rewarding things ever to come to an event on Sunday after a week of being stressed and doing homework,” Huber said.

Choi, a third-year in finance and current RallyCap president, said he was first inspired to help kids with disabilities in high school, when he worked with a Special Olympics basketball team. He said seeing the players succeed was rewarding.

“Being able to play alongside them was something special to me, where it wasn’t just watching them but kind of helping them reach their goals, so when I came to Ohio State, that was something I was looking for,” Choi said.

When the pandemic forced the club’s activities online for a year, Choi said the organization was challenged because its success relies on personal interactions and moments participants share together.

RallyCap has since returned to planning in-person events, including an upcoming opportunity for the children to play basketball Sunday.

Choi said it means a lot to him to see the kids having fun.

“It’s kind of hard to just not smile when you’re with the kids,” Choi said. “No matter how bad your week was, you can always get uplifted during it.”