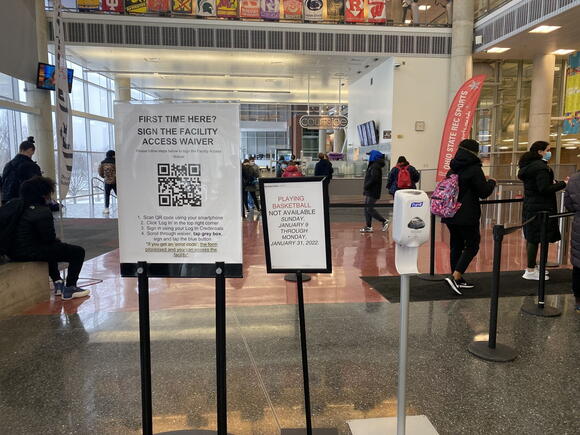 Student Life Recreational Sports temporarily ceased indoor basketball and soccer on Jan. 9 until the end of January in response to concerns about the Omicron variant. Credit: Caroline Fowles | Lantern Reporter

Student Life Recreational Sports temporarily closed indoor basketball and soccer at recreational centers on campus until the end of January due to concerns about the omicron variant.

The decision came alongside Ohio State’s updated guidance about COVID-19 for the spring semester and an increased positivity rate, which sits at 7.04 percent as of Tuesday.

This update also requires that group fitness classes operate at 60 percent capacity, delayed the start of intramural sports and sport club programming and closed the Kids Zone inside the RPAC until further notice. Most indoor facility reservations, like meetings, practices, special events and social gatherings, have been suspended as well.

University spokesperson Dave Isaacs said in an email Ohio State and Recreational Sports has to change their policies frequently based on the pandemic.

“Our COVID response protocols utilize the guidance of national, state and local health agencies and our own public health and medical experts,” Isaacs said. “Our approach will continue to be assessed to ensure we are in alignment with this guidance.”

Isaacs said it is unknown whether indoor basketball and soccer will resume at the end of this month, or if this hiatus may be in effect for a longer period of time. The last day of the closure is set for Monday, but this date is subject to change.

Will Burlingame, a second-year in accounting, said he was disappointed that the indoor basketball courts were closed.

“Basketball was a good way to meet people as everybody playing had a similar interest; it’s a pretty easy way to make friends,” Burlingame said. “I think some people are just frustrated that everything else at the RPAC is still open to be used but people can’t play basketball.”

Students like Burlingame and Shane Hohman, who are routine basketball players at the RPAC, said they will find new means to play the sport they love for the remainder of the closure.

Hohman, a first-year who is undecided. said the shutdown has been difficult for him because sports are beneficial for his physical health and stress relief.

“My experience with rec basketball has been great here. Although I do think that this is temporary and will be resolved soon, I wish that the RPAC would implement some other precautions rather than shutting the courts down,” Hohman said.