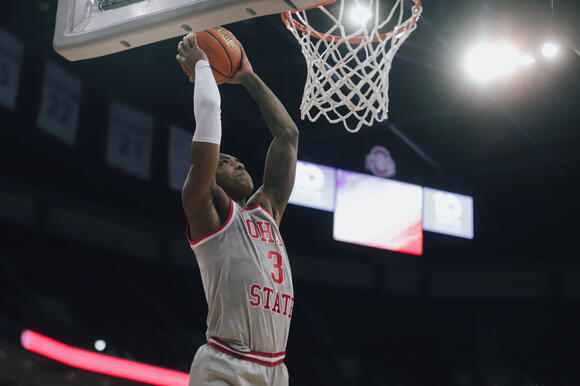 As the Nittany Lions failed to go away in the second half, Brown produced all six of his points over a stretch of 169 seconds to push the Ohio State lead to as much as 10 with 9:01 to go in regulation. While Brown’s offense was key in the Buckeyes’ 61-56 win over Penn State, head coach Chris Holtmann expressed pride toward Brown’s emergence.

“I was really happy for Gene. I thought he gave us really quality minutes today,” Holtmann said Jan. 16. “We need that from him and he’s just got to continue to grow in that role.”

Brown showed consistency in the Buckeyes’ next game, a midweek nonconference clash with IUPUI, producing a career-high 14 points while connecting on 4-of-6 field goal attempts.

Behind six first-half points, thanks to a flawless 4-for-4 mark from the charity stripe, Brown earned the nod to start the second half against the Jaguars — filling in for struggling senior forward Justin Ahrens.

The Conyers, Georgia, native made the most of his second-half start, scoring the Buckeyes’ first points of the final frame. Brown keyed Ohio State through an 9-2 early run in the half, producing seven points in the first five minutes of the half.

Brown’s contributions didn’t just end on the offensive side of the floor. The sophomore racked up four rebounds against the Jaguars. With attention to Brown’s defense and rebounding prowess, graduate guard Jimmy Sotos pointed to his versatility as the reason for his recent success.

“He can guard 1-through-5. He’s very active on offense, cutting, rebounding, keeping possessions alive. He makes stuff happen out there,” Sotos said. “Whenever Gene’s in, he’s always bringing energy, giving his full effort.”

Brown’s rise in minutes and increased role comes on the heels of a facial injury and concussion to freshman guard Meechie Johnson Jr. As Johnson has missed the Buckeyes’ last two games, Brown has played a key role in both of their wins without their typical scoring spark off of the bench.

Johnson’s injury, alongside long-term injuries to wing scorers graduate Seth Towns and redshirt senior Justice Sueing, and shooting struggles from Ahrens have set the Buckeyes back in terms of consistent impact players on the perimeter.

With Brown’s strong play, the Buckeyes have hardly skipped a beat, and he attributed his midseason success to always staying prepared for when his number is called.

“I just kind of stayed the course. I just come in and help the team any way I can, make an impact any way I can,” Brown said. “Whatever they ask me to do, I’m just going to do it to the best of my ability.”

With the Buckeyes trudging through Big Ten play, Holtmann emphasized the importance of Brown during their stretch run.

“He’s got good length, he’s got a big body, he’s got a physicality to him,” Holtmann said. “He did bring a real physicality that we needed. His ability to get on the glass is really important for our team.”