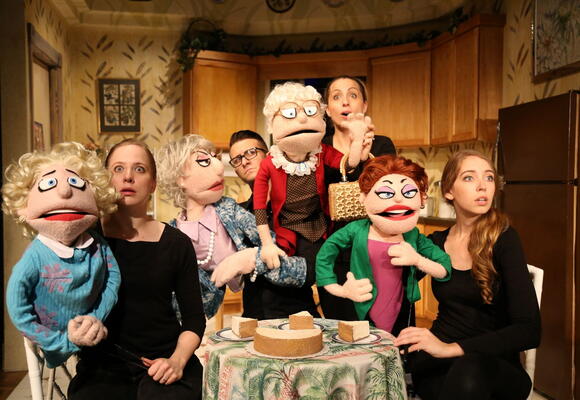 The Columbus Association for the Performing Arts will show “That Golden Girls Show! A Puppet Parody” at the Lincoln Theatre Feb. 11-12. Credit: Courtesy of Rockefeller Productions

Fans of critically acclaimed sitcom “The Golden Girls” can expect to see beloved characters brought to a Columbus stage — as puppets.

The Columbus Association for the Performing Arts will show “ That Golden Girls Show! A Puppet Parody ” at the Lincoln Theatre Feb. 11-12, according to its website. Samantha Lee Mason, the actress who plays the character of Rose Nylund in the production, said “That Golden Girls Show!” first made its debut as an off-Broadway production and is now touring across the country as a part of its farewell tour.

Mason said this will be one of the last chances for people to come see the show before it closes permanently.

“While I think that I will be very sad to say goodbye to Rose after spending over six months with her, it’s sometimes good to have a definitive end date so that you can set it free,” Mason said.

Mason said the show is separated into three different episodes of “The Golden Girls” and will take well-known lines and moments from the original series and play them out with puppet representations of the characters.

“We hope that the audience gets a feeling of nostalgia by watching the show, and I think with the puppets it elevates the humor a little bit,” Mason said.

Rich Corsi, vice president of programming at the association, said the presence of the puppets adds a unique element to the production and he is excited to bring the show to Columbus.

“I do not book a lot of shows with puppets,” Corsi said. “This will be my first show in how many years that I have been booking, that have involved puppets.”

Mason was not a frequent viewer of “The Golden Girls” before she auditioned to be a part of the puppet parody, but said she fell in love with it when she began watching more seriously and is happy to have the opportunity to play one of the beloved characters.

“I put the show on now as a comfort because I adore them,” Mason said. “It never gets old, and I feel very lucky to play Rose.”

One of the goals of the show is for audience members to feel as though they are at a live taping of “The Golden Girls” in the 1980s, Mason said. Commercials from the ‘80s will be played in between each episode, and Mason said moments such as this contribute to the overall atmosphere of the show.

Mason said she often feels a large amount of pressure when playing Rose because people who have seen the original series likely bring to mind an image of Betty White’s rendition of the character. Despite the pressure that goes hand in hand with the character she portrays, Mason said she has done everything she can to preserve White’s legacy.

“I have worked a lot on matching her vocal quality,” Mason said. “I watched her movements a lot, so I’m trying my very hardest to bring integrity to that character so that the audience is able to recognize that as the Rose Nylund that they know and love.”

“If you’re familiar with the show, come on out and see it, and if you’re not, still come on out,” Corsi said. “It’s a great chance to see something different.”

Tickets to “That Golden Girls Show!” start at $41, and additional information about the show can be found on the association’s website .