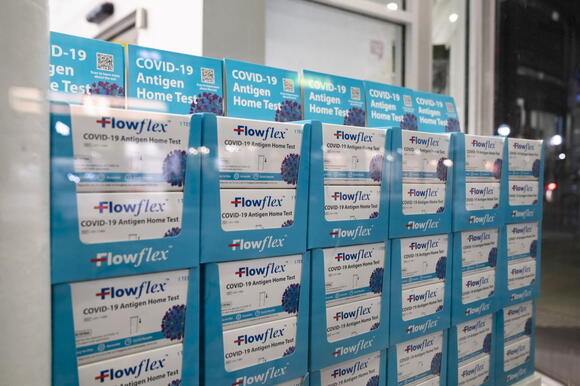 As of Jan. 19, any U.S. resident can order a testing kit through the United States Postal Service using their home address. Credit: Dominick Sokotoff/ZUMA Press Wire via TNS

At-home antigen testing kits, recently available through the federal government, can provide a useful tool for Ohio State students who want to test for COVID-19.

As of Wednesday, U.S. residents can order a testing kit that includes four rapid antigen tests to their home address, according to the White House website . Some students plan to use the service to diagnose COVID-19 quicker than a PCR test on campus.

Only one testing kit is allowed per address, which can create issues for students living in buildings with multiple residents such as apartments or residence halls. However, in those instances, students can file a service inquiry with the U.S. Postal Service to obtain a kit to their address.

Ally Leff, a second-year in speech and hearing science, said a handful of girls in her sorority chapter have tested positive. She said access to at-home tests, combined with required weekly tests at Jesse Owens North Recreation Center, would be very helpful in stopping the spread.

“It would be a lot more efficient for finding out who is positive and just protecting our house and our chapter from having an outbreak,” Leff said.

Corinne Rice, a fourth-year in hospitality management, said at-home tests could be convenient during breaks when resources on campus are more limited. For example, she said she had a hard time finding a test over winter break.

“I had some struggles finding a test that was within a couple of days of my symptoms, so I had to wait a little bit,” Rice said.

Along with at-home testing, Ohio State’s testing guidelines state students can test at JO North by scheduling appointments through MyChart. Rice said in her experience, testing through JO North is very organized and simple compared to other places she has tested.

She also said while she can always get a test at Ohio State, her roommate is not a student, so access to at-home antigen tests is important.

Rachel Smith, a second-year in sports industry, said an at-home test can act as a supplement to PCR testing at JO North.

“Doing an at-home test would be just a nice option to have rather than having to go on campus and then wait the amount of time for test results,” Smith said.