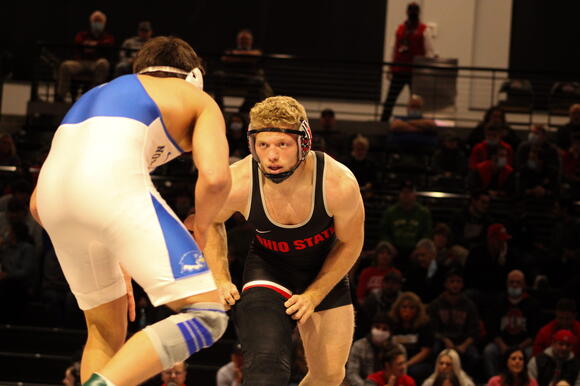 No. 9 Ohio State wrestling split a pair of matches at the Covelli Center Friday and Sunday.

“What a blessing,” Ryan said. “The unique thing about wrestling is that it’s not like football and other sports in that you can have a loss, but still end up winning nationals. The season is all about learning.”

No. 2 Iowa entered Friday’s contest boasting an undefeated record, including a 4-0 start in Big Ten play.

Redshirt sophomore Carson Kharchla, No. 7 in the 165-pound weight class, stole the show against the Hawkeyes, upsetting No. 1 redshirt senior Alex Marinelli 3-2 in a tightly contested match. Kharchla handed Marinelli his first loss of the season, while improving to 16-1.

While Kharchla pulled off a major upset, his teammate and redshirt junior 149-pounder No. 2 Sammy Sasso staved off an unexpected loss of his own. Sasso eked out a 3-2 win over No. 10 senior Max Murin, thanks to a go-ahead reversal in the third period.

“Continuing to wrestle, knowing where you are, knowing positions that you need to get in and just trusting in your wrestling ability,” Kharchla said. “As an individual, I think getting more comfortable in matches where the first, second and third period don’t go your way until the last 30 seconds is where I have improved myself.”

No. 17 senior Malik Heinselman started the day for the Buckeyes, facing Iowa freshman No. 10 Drake Ayala at the 125-pound weight class. Heinselman won by way of sudden victory with a final score of 7-5.

At 184 pounds, redshirt senior No. 7 Kaleb Romero wrestled against Iowa’s sophomore No. 18 Abe Assad. While Assad gave Romero a tight match, a late takedown lifted Romero to the win, 3-2.

A pair of redshirt seniors squared off at 133 pounds, as No. 3 Austin DeSanto of Iowa dropped Dylan Koontz and won by way of technical fall with a score of 19-4.

Redshirt sophomore No. 23 Dylan D’Emilio squared off against No. 2 ranked redshirt senior Jaydin Eierman. In a close match, Eierman pulled away late in the third period to win by decision 4-0.

To cap the night off, redshirt senior Tate Orndorff battled against Iowa junior Tony Cassioppi. In a high-scoring match, Cassioppi defeated Orndorff by way of major decision with a final score of 13-4.

Coming off of a close loss to Iowa, the Buckeyes came out strong against the Terrapins, dominating Maryland 39-4.

After an impressive comeback victory against Marinelli of Iowa Friday, Kharchla took no time in securing yet another victory against Maryland freshman Gaven Bell. Kharchla went up early and didn’t look back. By the second period, Kharchla led 18-3 and won by way of technical fall.

Koontz added another shutout win for the Buckeyes, blitzing past redshirt junior King Sandoval 10-0 in the 133-pound weight class, and D’Emilio picked up a win by technical fall with only 1:35 left in the first period.

Redshirt senior Fritz Schierl battled against Maryland sophomore Dominic Solis. After a scoreless first period, Schierl started to put some points on the board. Schierl ended up on top, winning the match by decision 5-2.

Romero wrestled in a ranked matchup against No. 12 redshirt senior Kyle Cochran of Maryland at the 184-pound division. Like Schierl’s match, after one period the score was tied at zero. Romero began to pull away from Cochran, pairing a set of takedowns together and winning by decision with a final score of 6-2.

Hoffman faced Maryland redshirt sophomore Kevin Makosy. Hoffman had a strong performance and did not let up from the start. With 2:03 left in the first period, Hoffman had a reversal and scored the first two points of the match. Going into the third period, Makosy had narrowed the gap and the score drew to 6-3. Hoffman quickly widened the gap once more, winning by decision with a final score of 10-3.

The last matchup of the day was a ranked one between Orndorff and No. 31 redshirt senior Zach Schrader of Maryland. After two periods, the match was 1-0 Orndorff, with the sole point coming from an escape. Schrader tied the match at 1-1 in similar fashion. Orndorff shut down Schrader’s comeback attempt with a takedown in the third period, and won the match by way of decision, with the final score tallying 4-1.

Ohio State is scheduled to travel and compete against No. 1 Penn State Feb. 4 at 7 p.m. on Big Ten Network.