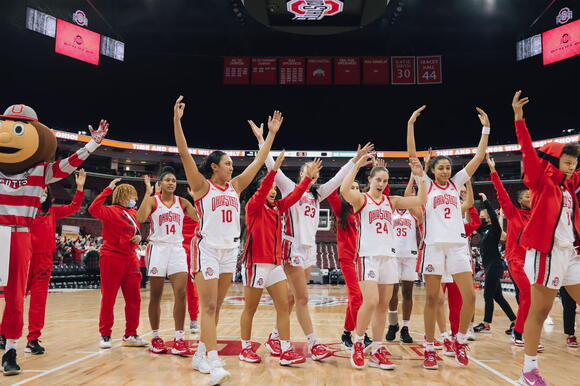 The Ohio State women’s basketball team pushed its winning streak to six games Sunday with an 80-71 road win against Rutgers.

In the second frame, the Buckeyes continued their full court press, which resulted in six turnovers and 14 points. Junior guard Jacy Sheldon accounted for four of the Buckeyes’ steals.

Ohio State continued to dominate the full court press with six additional turnovers and 12 points in the third quarter alone. The Buckeyes finished the game with 19 takeaways, which they turned into 31 points.

The Scarlet Knights (7-13, 0-8 Big Ten) continued to fight in the fourth quarter and outscored Ohio State in the final frame by two, however that was not enough to put the edge over the Buckeyes.

Rutgers graduate forward Osh Brown  entered the game averaging nearly a double-double with 9.9 points and 9.1 rebounds per game. Brown was the leading scorer and rebounder for the Scarlet Knights with a career-high 24 points and eight rebounds.

Ohio State will travel home to play No. 8 Michigan Thursday at 6 p.m. on Big Ten Network.