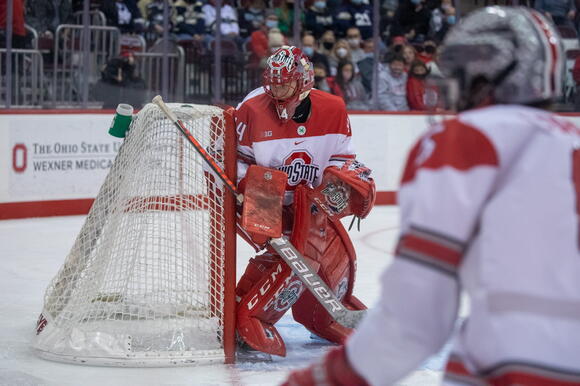 Ohio State’s offense showed up Friday, netting three straight goals against Spartan senior netminder Drew Deridder, a goalie who ranks first in the Big Ten for save percentage. An empty-net goal scored by senior defenseman Grant Gabriele at 18:51 in the third period sealed the opening-game win for the Buckeyes.

Ohio State head coach Steve Rohlik said he was proud of how his team played, especially when trailing for most of the first period.

“We got off to a good start. I thought we were playing well, even though we were down 1-0,” Rohlik said in a release. “We played a pretty solid game overall.”

In the series finale, it was the Buckeye freshmen who won the day. Freshmen forwards Georgii Merkulov and Cam Thiesing each tallied goals off assists from freshman defenseman Mason Lohrei. Merkulov finished with two goals with a pair of scores in the second period.

Ohio State lost the shot battle 42-30, but ended the night with a 3-2 victory on the scoreboard.

Gabriele said it was key for the Buckeyes to pick up a pair of wins away from Columbus.

“It’s always a great feeling winning on the road and an even better feeling getting a sweep,” Gabriele said in a release. “We can enjoy the win, but it’s back to work this week to clean up some things before we head to Penn State.”

The Buckeyes are now tied with No. 3 Michigan for the top spot in the Big Ten, with both teams facing conference opponents on the road next week.

Ohio State travels to play the Nittany Lions in a two-game series Friday and Saturday. Both games have puck drops scheduled for 7 p.m. and will air on Big Ten Network Plus.