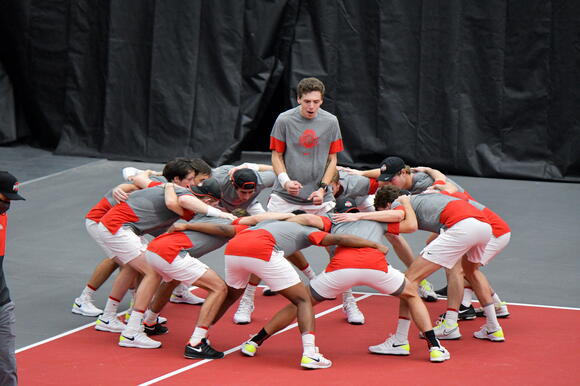 Illinois, who hosted its first match of the season, gave the Buckeyes all they could handle in doubles play, with Ohio State trailing for a time on all three courts before coming around to win the point 2-0.

The No. 1 team of graduate Matej Vocel and junior Robert Cash made their spring debut in the match and shook off a slow start, coming back from down 5-4 to swing the set in their favor 7-5.

No. 2 junior Justin Boulais and senior James Trotter escaped a competitive set. Illinois fended off multiple match points on the way to a 7-3 tiebreaker that clinched the doubles point for Ohio State.

The success of Cash’s debut continued into singles, where he looked dominant in a flawless 6-0, 6-0 victory to put the Buckeyes up 2-0.

No. 14 sophomore JJ Tracy made his debut as well, beginning his first set 2-2 before winning 10 straight games to take the court in a 6-2, 6-0 showcase.

No. 5 Vocel continued his hot start to the spring season in a 6-2, 6-1 performance. He improved to 3-0 in his first taste of Big Ten competition.

The most competitive match of the day was the matchup of No. 21 junior Cannon Kingsley and graduate Olivier Stuart that never escaped the first set. The set found its way to a tiebreaker that knotted 11-11 when the match was called.

The Buckeyes led on each of the other two courts when the match was called, with graduate Jake Van Emburgh and Trotter both taking the first set of their matches.

Ohio State will next travel to Chapel Hill, North Carolina, to play Arizona State during the ITA Kickoff Jan. 29.