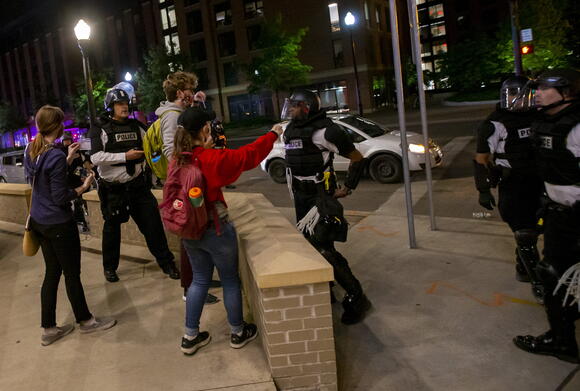 Three Lantern journalists clearly display their press credentials to Columbus Police June 1, 2021. They were pepper-sprayed by police after clearly stating that the media are exempt from the citywide curfew. Credit: Adam Cairns/The Columbus Dispatch

Columbus Division of Police officers who witnessed possible criminal conduct by fellow officers during protests in the summer of 2020 are now required to testify, an arbitrator has ruled, ending a months-long dispute between the police union and city that has stalled investigations into police use of force.

The ruling affects the investigation of incidents during the protests, including an investigation into the pepper spraying of Lantern editors after they identified themselves as members of the press.

Maeve Walsh, the Lantern’s former John R. Oller special projects editor who was among the editors pepper sprayed, said the decision is a win for people who have been impacted by the Columbus Police’s conduct, the people of Columbus and student journalists.

“We were pepper sprayed that summer, but we aren’t the only members of the media who have been afflicted by police officers in the past or filed complaints against them,” Walsh said. “So, I think this ruling really will bring a greater level of transparency to the Columbus Police Department, and I think that’ll make the job of journalists, student journalists a little bit easier, hopefully.”

According to the arbitration order, the Fraternal Order of Police — the union representing Columbus Police officers — disputed the subpoenas filed by former FBI investigator Richard Wozniak to compel the testimony of officers who witnessed possible misconduct during protests following the death of George Floyd in 2020. According to a previous Lantern article , 26 people filed complaints about police use of force.

A section in the collective bargaining agreement between the city and police union, which reads, “If a member has been advised that the investigation may result in criminal charges, the member’s refusal to answer questions or to participate in the investigation shall not be considered insubordination or like offense,” is at the center of the dispute.

The Fraternal Order of Police argued the section protects both focus officers — officers accused of misconduct — and witness officers from testifying and pointed to other sections in the agreement that distinguished between the two when intended. The city contended that notes from negotiations over the agreement — which occurred in 1990 — demonstrated “mutual intent” that the section would apply only to focus officers.

The arbitration order specified that the internal interviews conducted by investigators within the police department on the case cannot be used in the investigation. The investigators themselves will also not be subpoenaed to testify.

This decision comes after three Columbus Police officers were charged for their conduct during the protests, including assault for pepper spraying protestors away from the protest, abandoning duty and interfering with civil rights.

A federal judge granted a motion on April 30, 2021, to temporarily bar police from using tear gas, pepper spray, wooden bullets and other forms of non-lethal force on nonviolent protests after 26 individuals filed the lawsuit against Columbus and Columbus Police.

The Fraternal Order of Police Lodge No. 9 President Keith Ferrell could not be reached for comment at the time of publication.