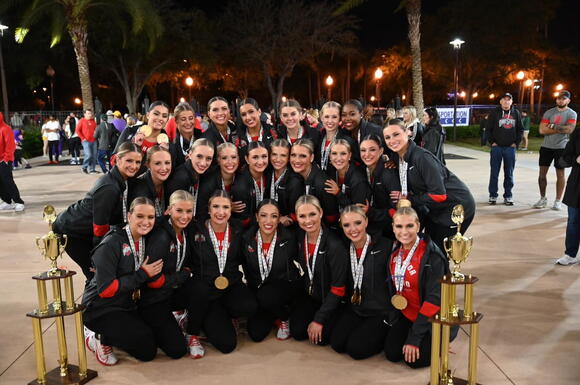 Members of The Ohio State University Dance Team pose for a photo outside ESPN Wide World of Sports after being awarded first place titles in the jazz and pom categories. Credit: Courtesy of Melissa McGhee

The Ohio State Dance Team, known for its peppy home-game performances, has won at least one of three national titles it’s competed for every year since 2018. But last weekend, it snagged all of them.

The team competed in several rounds at the Universal Dance Association’s national competition in Orlando, Florida, Friday through Sunday, earning the championship titles in all three categories it competed in: game day, jazz and pom, according to the Ohio State Dance Team Instagram page .

The dancers spent a large portion of their time in Orlando preparing for competition, but preparations for nationals began far earlier in late winter of the year before. Melissa McGhee, head coach of the dance team and Ohio State alumna, said preparations she had to make for the competition began at the start of 2021.

“Late winter, early spring, we kind of start to think about the upcoming competitive season and secure who our choreographers would be,” McGhee said.

For the dancers, preparations begin soon afterward in the summer.

“We meet as a team for the first time in the summer, and we will start doing just basic technique things,” Hailey Willis, a fourth-year in human development and family science and captain of the team, said.

After a summer camp to kick off the team’s season, the dancers come home and prepare for football games. However, there’s a quick turnaround for nationals, which makes September through November an incredibly busy time for the dance team, Willis said.

“We learn choreography for nationals in September, typically,” she said. “So that’s when we learn our pom and game day and jazz. So September was kind of a crazy month. And then pretty much October to November we start cleaning those routines.”

December is when preparations for nationals are the most intense, with more practices added as they get closer to competition. Although the team normally practices four times a week, McGhee said they bump it up to six in the month and a half before leaving for nationals.

With these added practices, the team is able to run all the way through its dances several times, Willis said. This schedule is even held through winter break to ensure the dances are in perfect shape for competition.

“Once we start doing those full runs, we can get much more nitpicky, and we’re here over Christmas break, which is about a week to two weeks,” Willis said. “And we just keep grinding and perfecting our routines.”

A team full of tradition, nationals looks nearly the same year to year, Willis said. After the team starts its time in Orlando with two days of practice, another long-standing tradition — in a more fashionable form — takes place before the team competes.

“Each year, we kind of pick sunglasses that represent that year,” Willis said. “This year, we wore red in all of our costumes, so we chose to do red sunglasses. So we all put on our sunglasses, we all have our headphones in, and we’ll warm up individually.”

Making team history by leaving Orlando with three wins is no easy task, and despite being back in Columbus, McGhee said she still hasn’t completely processed it.

“It really wasn’t until the hours before the awards ceremony where my brain started to kind of let myself think about that possibility,” McGhee said. “So I think, coming home, I’m still kind of processing — you know, it’s never been done before. And so it almost felt like this very far-off thing.”

While other teams may take a well-deserved break after a competition season, the Ohio State Dance Team will spend its offseason performing at winter sporting events and preparing for the upcoming year.

“Our team performs at basketball and wrestling and women’s basketball,” McGhee said. “So we’ll have all of those events, but from a competitive perspective, it’s our offseason. So it’s a really unique opportunity to get back to the drawing board.”