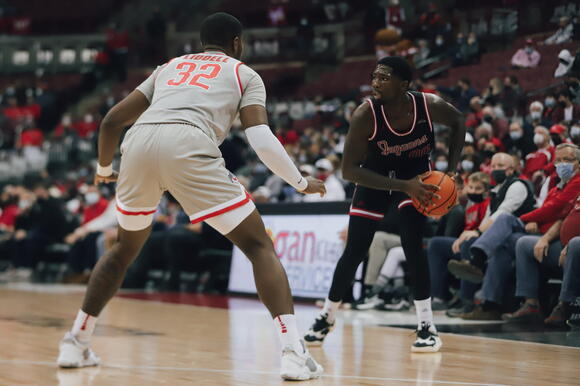 When the Buckeyes entered the locker room at halftime against IUPUI Tuesday, the team displayed one statistic on their board.

Ahead adequately but not comfortably, No. 19 Ohio State led 37-24 over the 1-14 Jaguars. Graduate guard Jimmy Sotos said the Buckeyes’ halftime message helped them stay disciplined when they retook the court for the second half.

“We had 47 percent written on our board because that was their field goal percentage going into the half,” Sotos said. “We knew we had to pick it up.”

After allowing IUPUI to shoot 47.4 percent in the first half, Ohio State held its Horizon League opponent to just a 19 percent clip from the field in the final period. The Buckeyes’ defense allowed a season-low 32.5 opponent field goal percentage to seal their second straight victory, carrying a theme from their first win against Penn State Sunday.

Graduate forward Kyle Young stole the ball from the Nittany Lions’ offense with 1:25 remaining in the second half. The Buckeyes then made seven shots at the free-throw line to fend off Penn State, and graduate guard Jamari Wheeler said Young’s steal was important because “every possession matters.”

Wheeler added that the Buckeyes don’t take winning conference games for granted because of the difficulty required in each Big Ten bout. Ohio State currently stands 5-2 in conference play and tied for third in the standings.

Prior to their last two defensive showcases, the Buckeyes allowed back-to-back games of at least 46.6 percent shooting from the field against Northwestern and at Wisconsin. Now, Ohio State holds opponents to an average score of 67.4 points per game on 40.7 percent shooting.

Head coach Chris Holtmann admitted that Sunday’s game “wasn’t always fun to watch,” but eventually provided the team with something to build from.

“I thought it was a step forward for us,” Holtmann said. “We were really good defensively. It was one of those games where you had to grind it.”

Sotos said the Buckeyes aim to get “kills” defensively, which he described as stopping opposing offenses from scoring on three or more consecutive possessions. Against IUPUI, Ohio State forced the Jaguars to make just one of their final 10 field goal attempts, and versus Penn State, the Buckeyes held the Nittany Lions to just three buckets in the final four minutes — all coming in the final 53 seconds.

“The way we were able to lock in on the defensive end, get multiple stops in a row, string together a chain of stops — that allows us to get going on the offensive end,” Brown said. “I feel like that really makes a difference in a game like this, where the scoring is not really going where it needs to be, so we just fall back on our defense.”

Ohio State’s offense has efficiently performed at a high rate all season, averaging 75.1 points per game on 48.3 percent shooting. But the Buckeyes’ defense hasn’t played quite as consistently.

With back-to-back outings of more complete games on defense, and the usual production on the other end of the court, Ohio State could be a force to be reckoned with if it maintains its momentum.

“I feel like that’s where we’re starting to shift our mindset to, try to focus on that more and more each game because I feel like defense wins championships,” Brown said. “If we want to get a title or a ring, we’re going to have to focus on our defense and lock into it.”