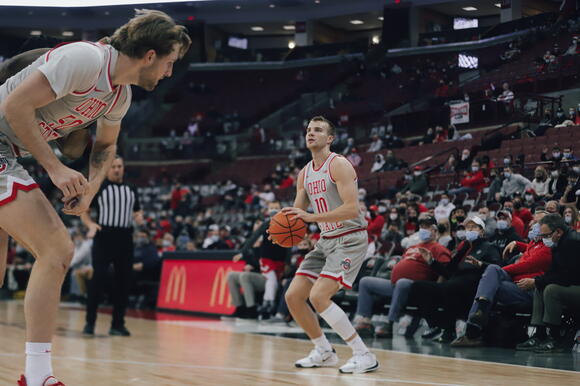 As the Buckeyes pushed through their December schedule, one thing was clear: Justin Ahrens had found his shot.

But No. 19 Ohio State was forced to shut down program activities for a little over three weeks due to COVID-related issues — knocking Ahrens’ strong start off course. Since the Buckeyes returned from the break, Ahrens has struggled to find his stroke — shooting 6-for-29 over Ohio State’s last six games.

“He’s just got to cut loose and play. He’s got to play with a little more juice, a little more confidence to him,” Holtmann said. “He’s a tremendous shooter. I really don’t worry about him at all. I think he’s going to hit his stride.”

Prior to the Buckeyes’ hiatus, Ahrens was drilling 3-pointers at a high rate — shooting 43 percent in Ohio State’s first 10 games. Since then, Ahrens has shot just 20.6 percent from deep.

As the COVID-related break affected Ahrens, along with the team as a whole, assistant coach Ryan Pedon said the senior forward may need some time to get his legs back.

“I see a lot of Justin’s shots being right on, a lot of them being front rim, though,” Pedon said. “I think some of that is probably attributed to his legs and coming off of the layoff.”

Pedon said another notable reason for Ahrens’ decline is the level of competition the Buckeyes have faced in recent weeks as they’re now in the midst of their Big Ten schedule. Prior to Ohio State’s midseason break, Ahrens shot 4-for-12 from 3-point range across two conference games.

Since returning from the break, Ohio State has played five Big Ten opponents and Ahrens has shot 20.8 percent from beyond the arc in those games. Ahrens entered the stretch averaging 8.7 points per game, a number that has dropped to 6.8 as of Wednesday.

“When you’re as good of a shooter as he is for three or four years, he gets a lot of attention,” Holtmann said.

Although Ahrens’ efficiency from 3-point range has dropped, his responsibilities have not lessened. Pedon said the coaching staff still thinks Ahrens is hunting his shot aggressively and finding open looks.

Even when Ahrens’ shots aren’t hitting, he’s still a valuable member of the Ohio State offense due to the gravity he creates on the perimeter. His spacing has helped allow freshman guard Malaki Branham find his rhythm from distance as the Columbus native has shot 41.7 percent from 3-point range since the break — including a 6-for-10 performance against Nebraska Jan. 2.

While he typically dials it in from 3-point range, Ahrens made his first 2-point field goal of the season Thursday against Wisconsin.

Although Ahrens has made his mark in a variety of ways during his struggles, graduate guard Cedric Russell encouraged the Versailles, Ohio, native to continue shooting despite his recent struggles.

“The best way out is to keep shooting,” Russell said. “The whole world knows he can shoot the ball, so just continue to shoot.”