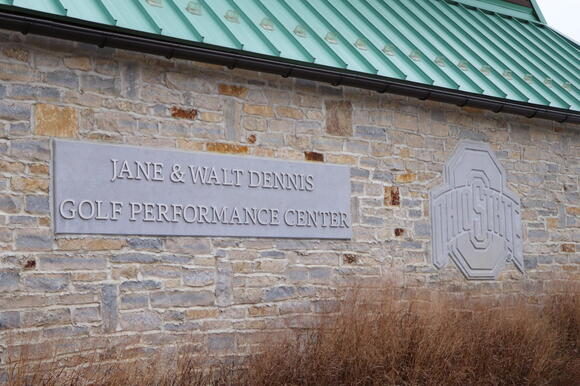 Both the men’s and women’s golf teams use the facilities at The Jane and Walt Dennis Golf Performance Center to hone their skills during the winter. Credit: Danny Fogarty | Assistant Campus Editor

Both the women’s and men’s golf teams at Ohio State have been on a break since mid-October.

With the lack of competitive play, it may be difficult for the players to stay in shape in preparation for the upcoming spring season, which begins Jan. 31 for the women’s team and Feb. 14 for the men’s. However, it may be those months of practice that make all the difference come the season’s start in late January.

Junior Jackson Chandler said while some players become complacent during the break, it is important to stay disciplined.

“A lot of people are like, ‘OK, well, I have four months to my next term and I can just chill for two months,’ ” Chandler said. “But, in reality, it’s those four months that really sets you apart from the other guys in spring.”

Chandler said this is why he took a trip to Charlotte, North Carolina, during the break to practice with his personal trainer. He said having that one-on-one practice is a big part of his preparation because he and his coach are able to focus solely on his skills.

Similarly, junior Lauren Peter said she went down to Florida to see her swing coach during the break. She said it is nice to have time to practice with how heavily it affects her performance ahead of the upcoming season.

“I like to work out as much as I can for the team so we can all come back together and feel ready for the spring,” Peter said.

Both Peter and Chandler said they also used the facilities at The Jane and Walt Dennis Golf Performance Center, home to Ohio State golf, to hone their skills during the break.

The break is not just filled with workouts and swing coaches, though.

It is also a time for players and coaches to spend time with friends while they don’t have to go to tournaments or, in the players’ case, go to class.

Men’s head coach Jay Moseley said he uses the break to do something he has trouble with during the season: spend time with his loved ones.

“I’ve got a wife and two young kids at home, so it’s kind of a sweet time for us to spend some quality time doing stuff together as a family,” Moseley said.

Moseley said it helps that his children are out of school for the start of January as he can see them virtually anytime.

One problem both teams face is not being able to bond during such a long break. When every player moves back to a different place, it can be hard for them to stay together mentally.

Nevertheless, both teams try to keep in contact as best they can. Peter said the team tries to stay cohesive by messaging each other and checking in on each other’s progress.

“We just type in the group chat every once in a while and talk to each other,” Peter said. “Like, ‘How’s everyone doing?’ and just, ‘How’s everyone’s working out, practicing?’ Just stuff like that.”

For the men’s team, one goal is to use the time they have together wisely.

Chandler said although it is difficult, it is good to spend at least some time with his teammates before they leave in December and after they come back in January.

“It’s kind of hard with everybody going away with family,” Chandler said. “It’s all about taking advantage of those little moments we have together at the end of the semester and at the beginning of next semester.”

The men’s team has about a month until its first spring tournament at the Albany Collegiate Invitational in New Providence, Bahamas. They have only just begun to practice, but they have already made some headway for the upcoming season.

Moseley said this time is crucial as it gives them the chance to start off the season, which will last until June 1, by building skills and chemistry every day.

“We want to just start a journey that’s going to produce some positive things for us down the road,” Moseley said. “Just focus on getting a little bit better each and every day.”

The women’s team has its first tournament a few weeks sooner as they travel to Palm Beach, Florida, for Big Ten Match Play Jan. 31.

With its first tournament just weeks away, the women’s team has already begun practice. Peter said the team got off to a great start this week and is looking forward to the spring season.

“We made a really good start to this week. We worked really hard in the gym,” Peter said. “We’re really excited just to get going and get started.”