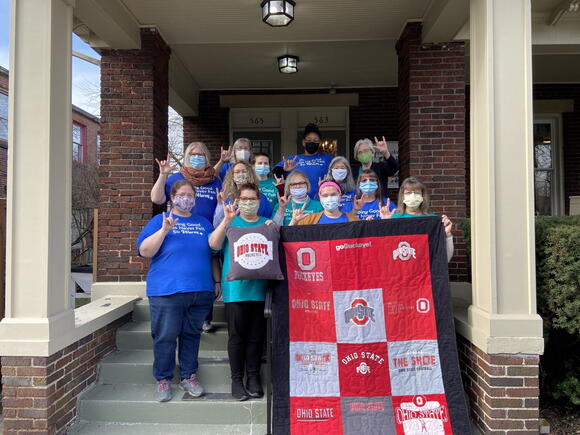 Keepsake, a nonprofit that employs deaf and hard-of-hearing people, makes T-shirt blankets by taking customers’ T-shirts and transforming them into a memory-filled blanket or quilt. Credit: Preston Harmon | Lantern Reporter

Keepsake T-Shirt Blankets takes customers’ old T-shirts and transforms them into a memory-filled blanket or quilt, but with a twist.

Keepsake, located at 563 S. Dawson Ave., has employed individuals who are deaf and hard of hearing since 1998. Meredith Crane, executive director of Deaf Initiatives — Keepsake’s umbrella name — said she started Keepsake because of the hardships she saw her two deaf children endure as she went to job interviews with them as an interpreter.

“The questions they would ask my kids would blow me away, like, ‘What could you possibly do for us?’ ” Crane said.

Keepsake operated a little differently in its early days, Crane said. Instead of the business it is today, the nonprofit was known exclusively as Deaf Initiatives and worked toward providing opportunities for those who are deaf and hard of hearing. This included workshops and bus trips to various universities and colleges such as Gallaudet University and the Rochester Institute of Technology.

Crane said she had a vision for a business, but discovered the product to launch it with while talking to a fellow mother on the sidelines of a soccer game: T-shirt quilts. Around six years ago, Crane said she and the board of Deaf Initiatives decided to focus solely on the T-shirt quilt and blanket business.

“In the back of my mind, I always wanted a business because my kids were teenagers at that time,” Crane said. “Both my kids are deaf, and I wanted them to work.”

Since its inception, Keepsake has employed over 160 people who are deaf or hard of hearing, Crane said. Shonna Collins, office manager for Keepsake, is one of 16 current employees and has been with Keepsake since 2008.

Collins has Usher syndrome, which causes a deficit in hearing and vision, Crane said. However, Collins said she has many responsibilities around the office, such as making schedules and reports, responding to customers, hiring and training.

Collins, who has worked in the retail industry in the past, said Keepsake is a unique environment compared to other workplaces.

“It’s so different,” she said. “When I’m in the workplace and I’m the only deaf person, communication solely happens through writing back and forth. Most of the time, I’m the last person to know things because I have to wait for someone to tell me.”

Collins said her experience is far different at Keepsake because of her ability to communicate with those around her with ease.

“The communication is just so much easier. It’s much more free-flowing, people are laughing and I understand what’s going on,” Collins said.

This difference regarding freedom of communication for those deaf and hard of hearing was Crane’s goal all along, she said.

“I said if I could ever have a business where everybody could communicate in sign language, barrier-free, that’s what I want to do,” she said.

Keepsake also gives back to the community with The Be Warm Project , Crane said.

Using leftover fabric from blankets and quilts they have made, Keepsake makes blankets, gloves and hats to donate to homeless shelters in Columbus and individual families struggling with homelessness, Collins said. The project has donated over 2,000 items since 2017.

“We recently donated a basket full of blankets, gloves and hats to a family who is experiencing homelessness, and they were grateful,” Collins said. “And, you know, it feels good to help that community.”