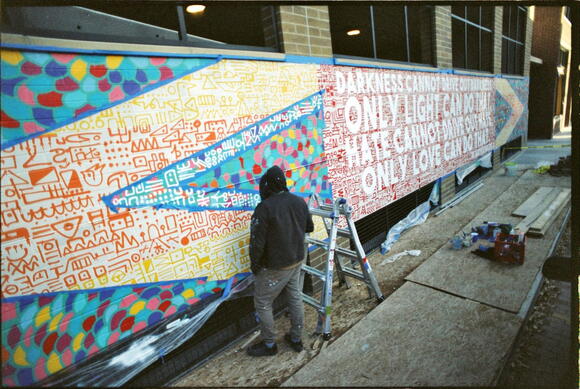 A mural by artist Adam Hernandez titled “Be the Light,” is located on the side of the Lincoln garage in the Short North Arts District in Columbus. Credit: Courtesy of Brennan Kurfees

Drawing on how ancient rulers were immortalized by recognizable symbols, public artist Adam Hernandez hopes to incorporate elements that are unique to him into his artwork.

Despite having no expectations when he moved to Columbus from the Bronx around 13 years ago, Hernandez said it was a good starting point for him, helping him leave his mark and flourish as an artist. Hernandez said he enjoys combining bright colors, shapes, lines and symbols inspired by Aztec and Mayan written language with modern-day graffiti.

“The Mayan and Aztec languages were glyphic scripts, so instead of combinations of letters, like English, they used different symbols or pictures to express their thoughts or ideas,” Hernandez said. “With my graffiti — when someone sees a thunderbird in an Aztec mural or tomb, that’s symbolic to someone’s name, and is my signature piece — if people see it, they can know whose it is.”

People can often get caught up in a routine 9-to-5 life, Hernandez said, but finding something bright, colorful and different can be a spark of inspiration to find one’s inner strength.

“I like to use my work as a tool or platform in which I speak about things that are important to me, which is usually finding your inner strength, being confident, looking at things past the surface and trying to connect with a spiritual or mystical side of the universe,” Hernandez said.

Hernandez said he sold his first work of art in Columbus around a decade ago at 83 Gallery, a small gallery in the Short North that has since closed. Since then, he said he has painted many outdoor murals and done art and design for brands such as Jack Daniel’s and businesses, including Jackie O’s Pub & Brewery and Condado Tacos.

Hernandez said he had the opportunity to paint “ Be The Light , ” a mural tribute to Martin Luther King Jr. in the Short North Arts District.

“I really like the whole ‘Darkness cannot drive out darkness — only light can do that. Hate cannot drive out hate — only love can do that’ quote from MLK, because it’s true,” Hernandez said. “Love is the only way to heal, and that’s where some of the color and the name of the mural comes from.”

Hernandez said the poetic symbolism and Martin Luther King Jr.’s nonviolent philosophy helped him visualize a mural that could reach a modern audience.

“The shape of the diamonds pushing outward from the center with the bright color is the source of energy and light pushing darkness out,” he said. 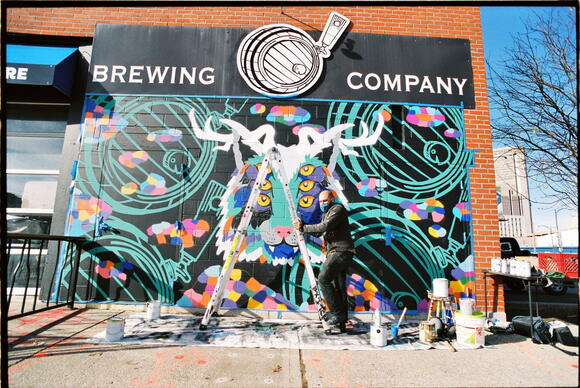 Artist Adam Hernandez portrays one of his mythological figures on the side of Jackie O’s On Fourth in Columbus. Credit: Courtesy of Brennan Kurfees

“A lot of Adam’s work already mixes animals with multiple eyes, so his unique style really fit in with what we were looking for,” Clift said.

Clift said it’s important to set forth minimal guidelines to grant artists such as Hernandez the freedom to express themselves.

“We want them to still have their own identity,” he said.

Corey Lippitt, head of design and social media at Jackie O’s Pub & Brewery, said the company is always trying to stay at the forefront of style, and Hernandez was the first artist they worked with when introducing their vinyl-wrapped cans.

“Beer can look however we want,” he said. “It really doesn’t have to fit any certain style, and with the vinyl wrap, Adam really heightened what we already had.”

Teaming up with Hernandez for the new cans was a big step in making them more vibrant — which Lippitt said helps people see the product from afar. He said both Hernandez’s artwork and personality speak volumes.

“Adam is super humble, creative, and incredibly capable, and has helped with one of our most successful series ever,” Lippitt said.