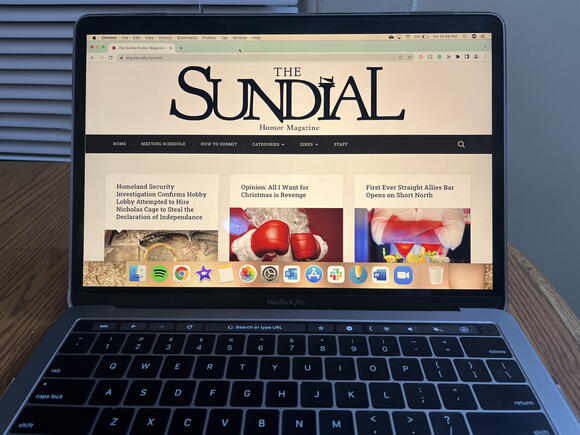 Rather than using the Grubhub robots strictly for food delivery when they rolled onto campus, writers for The Sundial wasted no time in using them as fodder for stories .

The mission of The Sundial Humor Magazine is to bring laughter to the Ohio State community by focusing on mostly campus-related topics, Zach Levy, a fourth-year in engineering physics and editor-in-chief for The Sundial, said. The magazine, which has been around since 1911 and boasts alumni such as R.L. Stine and James Thurber, publishes comedic pieces similar to The Onion and ClickHole, Levy said.

Henry Levenberg, a fourth-year in technical education and training and staff writer for the magazine, said he looks for topical humor that is specific to Ohio State when writing a new article.

“Something will happen on campus, and that will turn into an article,” Levenberg said.

Levenberg said he finds it funny when people do not realize that the articles published by The Sundial — such as “ Shocking New Report Finds Morrill The ‘Least Favorite Dining Hall’ On Campus ” and “ Sundial Humor Magazine Declares Itself Oldest Student Organization on Campus ” — are satirical.

“They get mad at us because they’re like, ‘I can’t believe the university did this,’ ” Levenberg said. “They’ll claim we’re fake news, but, like, that’s the whole concept.”

Levy said the first step to writing a satirical article is to put pen to paper without overthinking it and then insert humor while revising.

“The first draft doesn’t actually have to be good, by any stretch of the imagination,” Levy said. “When you’re writing and sending in a first draft, it really just has to exist. It’s a lot easier to start with something that’s not amazing and then edit it into something good than it is to create something that is amazing on the first try.”

The Sundial receives university funding as a student organization, and Levenberg said he finds irony in the fact that they use that funding to make fun of the university.

“We get however much a year to be an organization, and we use their facilities and resources and then we just make fun of them,” Levenberg said. “I think that’s hilarious to me. It’s the best part.”

Idris Malik, a third-year in physics and social media officer for The Sundial, said the ultimate goal of the organization is to bring a lighthearted presence to the Ohio State community.

“That’s the end all be all,” Malik said. “If someone thinks that something that any of our members wrote is funny, and they enjoyed it enough to appreciate it for 10 seconds or show it to a roommate or something like that, that’s making our community happier.”

The Sundial holds meetings every other Wednesday in the Student-Alumni Council Room in the Ohio Union and is open to all Ohio State students, Levy said.