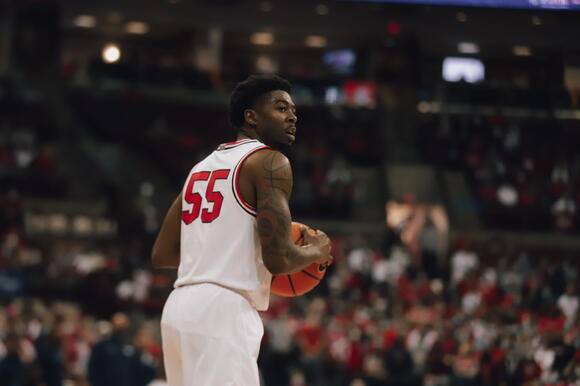 The Buckeyes have little time to celebrate defensively grinding out a win over Penn State Sunday with their third game during a five-day stretch come Tuesday.

Continuing its three-game homestand, No. 19 Ohio State (11-4, 5-2 Big Ten) will next host Indiana University-Purdue University Indianapolis in a contest added to the schedule Jan. 10 .

Head coach Chris Holtmann said David Egelhoff, director of basketball operations, sent emails to prospective opponents after three games originally scheduled in December were canceled due to COVID-19. Instead of spending time in the practice gym, the Buckeyes will compete on their home floor.

“We just wanted game repetition for our guys, that’s kind of the bottom line,” Holtmann said. “I wouldn’t mind having a week of practice to continue to grow and get better, but I know our guys need some game rep. I think that’s important.”

The Jaguars (1-14, 0-6 Horizon League) will enter Columbus on a nine-game losing streak. Their only win came in 61-41 fashion against Spalding University of the Division III ranks Nov. 23, 2021.

Last in the Horizon league in scoring, IUPUI averages 52.2 points per game behind leading-scorer and graduate guard B.J. Maxwell, who puts up 11.6 points per outing. Maxwell shoots 34 percent from the field, while sophomore guard Bakari LaStrap leads the team with 46.7 percent shooting from 3-point range.

Defensively, however, the Jaguars are second-best in their conference, holding teams to an average of 66.7 points. Three players on IUPUI’s roster stand taller than 6-foot-9, including senior forward Jonah Carrasco, who is ninth in the Horizon League with 12 blocks.

Ohio State played one of its best defensive games Sunday, holding the Nittany Lions to 39.6 percent shooting and out-rebounding them 37-30. The Buckeyes have committed their lowest total turnovers in their last two games with seven and nine, respectively, and Holtmann said the team is taking a step forward on defense.

“I’m sure at times it wasn’t always fun to watch, but it was one of those kind of games where you had to find ways to grind possessions,” Holtmann said. “I was proud of our guys for doing that. It was a really good defensive effort, and now we have to build off of it.”

Ohio State has not had typical success as of late behind the 3-point line. Senior forward Justin Ahrens has gone cold from distance, shooting just 2-for-13 at range in the last three games, as his team has shot 19.3 percent beyond the perimeter over the last two.

Graduate guard Jamari Wheeler said the Buckeyes have taken deeper 3-point shots, so they’ve focused on getting closer to the arc and trusting their stroke.

“Just stay confident. We know it’s going to fall,” Wheeler said. “We’re going to have some nights that shots are not going to fall, and that’s when we go back and rely on our defense.”

Following Sunday’s win, Ohio State awarded senior forward Harrison Hookfin a scholarship . Hookfin, who Holtmann said is a “high-level” student and diligent athlete, spent the last three seasons as a walk-on from Lebanon, Ohio, and has appeared in two games this year.

Currently fourth in the Big Ten Conference standings, Holtmann said the Buckeyes cannot deviate their focus and effort during their upcoming midseason nonconference matchup. Tuesday will present the third all-time meeting between IUPUI and Ohio State, and Holtmann wants his team to maintain its rhythm.

“You want to play to your standard,” Holtmann said. “We want to play how we play. We want to continue to build off the really good defensive effort against Penn State and grow.”

Tip-off between the Buckeyes and Jaguars is scheduled for 7 p.m. at the Schottenstein Center. Big Ten Network will broadcast.