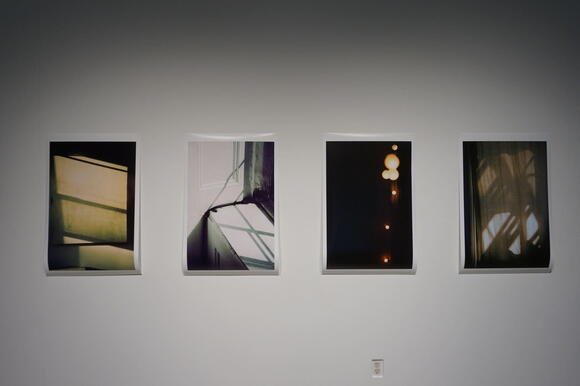 Photos by visiting assistant professor Christopher Stackhouse are on display as part of the “Recent Work” exhibition in the Hopkins Hall Gallery. The exhibition will be on view until Thursday. Credit: Phoebe Helms | Lantern Reporter

Located at 128 N. Oval Mall, the gallery serves as a venue for Ohio State students and faculty members to display their work in various exhibitions, as well as to participate in design, research and creation processes. The “ Recent Work ” exhibition showcases Dionne Lee, Illya Mousavijad and Christopher Stackhouse. Lee, a post Master of Fine Arts lecturer and visual artist from Oakland, California, said there is an intertwined relationship between her art, nature and history.

“A lot of my work explores my relationship to nature and the outdoors and thinking about how our relationships with spaces have been formed through ancestral trauma and historical systems such as segregation,” Lee said.

One of the main pieces Lee has displayed in Hopkins is a short video segment entitled  “Castings,” which depicts a stick — in the shape of a Y, moving across the ground — as a divination tool, she said.

“So you charge this stick to tell you where there’s water, so I was attracted to that symbol as kind of like a casting tool, or a tool for navigation,” Lee said.

Mousavijad, a visiting assistant professor in art and technology with a Master of Fine Arts from the University of Pennsylvania, said he is showcasing two pieces connected to his Iranian heritage.

Mousavijad’s first piece contrasts a poem about pain caused by a friendship, written by Kurdish Iranian singer Shahram Nazeri, and an animation of the Iranian flag and the American flag waving directly at each other in the wind. Mousavijad said he used this poem to describe a “precious pain” between two countries that once had friendlier relations.

“I took that a little out of its context and related it to the Iranian and U.S. relationship, which is quite extreme,” Mousavijad said.

His second piece, “A Night at the Pottery Shop,” once again contrasts poetry with a new medium of art: a voice recording. The recording relays a conversation between Mousavijad and a Jordanian friend with an expiring immigration status as they discuss the ideas of Middle Eastern poets Elyas Alavi and Omar Khayyam.

“We understand the temporality of life and also the meaningless of the sort of class and race identity boundaries that we have in life,” Mousavijad said. “When we die, we all merge into the same soil.”

Stackhouse, a visiting assistant professor in the Department of Art, has a background in art that has taken him from Grand Rapids, Michigan, and San Francisco to New York City. He said the time he spent in New York City directly influenced his work being shown in the exhibition.

“These are images that were on a set of four canisters of film I shot in 2014 and 2015, and they’re all shot in my apartment in Brooklyn,” Stackhouse said. “And on those rolls were shots of my kids and city shots of different things. I took all kinds of pictures, but all 35 [millimeter] films and all at different exposure speeds.”

Light plays a large role in the pieces he chose for his display at Hopkins Hall, Stackhouse said.

“If you focus on what photography is, which basically literally means ‘light writing,’ that’s kind of what this is,” Stackhouse said. “It’s a focus on catching very private, meditative moments where the light just becomes part of that.”

The “Recent Work” exhibition will be on view until Thursday. Those interested can register online to view the exhibition on the Urban Arts Space website . Time slots are available from 11 a.m. to 4 p.m.