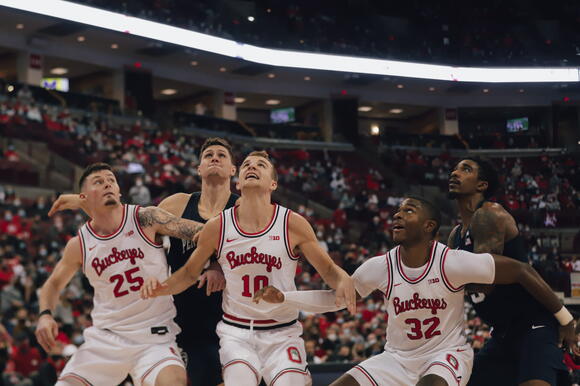 With 1:25 left in the game, the Buckeyes were clinging to a 54-49 lead with the momentum and the ball in Penn State’s hands.

Head coach Chris Holtmann pointed to that play as a crucial one in No. 16 Ohio State’s 61-56 victory against Penn State at the Schottenstein Center Sunday.

“Play of the game,” Holtmann said. “It was the difference in a lot of ways from that thing being a one-possession game.”

Things weren’t as smooth sailing for Ohio State’s defense in the first 4:43 of the game. The Nittany Lions raced out to a 10-4 lead on 4-for-9 shooting, as Sessoms and redshirt senior forward Greg Lee — who didn’t play in the first meeting Dec. 5, 2021 — had four and five points, respectively.

At the media timeout with 15:17 left in the first half, Holtmann wanted his team “to guard better. Bottom line.”

“Lock back in. Coach said, ‘Lock back in, lock back in,’” graduate guard Jamari Wheeler said. “Get stops. Don’t take that lead for granted. We know that, and we know that that’s a type of team that’s never going to go away.”

Ohio State’s defense responded to Holtmann’s message by not allowing a field goal for the next 6:50, as a made free throw from Penn State redshirt senior forward John Harrar was the only point until Lee’s layup fell with 8:27 remaining in the first half.

After the Nittany Lions’ opening 4-for-9 shooting parade, the Buckeyes held Penn State to 38.6 percent on 17-for-44 from the field. For the game, it made just 39.6 percent of its shots — its second-lowest shooting percentage of the season.

The Nittany Lions had balanced contributions from their offense, as every player who logged minutes found their name in the scoring column, but tied their lowest scoring performance of the season that they matched in an 81-56 loss to Massachusetts Nov. 15, 2021. They only had two in double figures as Sessoms and senior guard Jalen Pickett who had 15 and 11 points, respectively.

The Buckeyes locked up the Nittany Lions without the high on-ball energy freshman guard Meechie Johnson Jr. provides, as the Cleveland native missed his second-straight game with a facial injury.

“Pulling a guy like Meechie and his ball pressure out, as little as that sounds, that’s a factor,” Holtmann said. “Especially in a game like this where they’re so heavy ball-screen centric.”

The Buckeyes had their best rebounding performance since their overtime win at Nebraska Jan. 2, hauling in 37 misses Sunday.

“This is the first team that’s outrebounded us in the last four games,” Penn State head coach Micah Shrewsberry said. “What they did on the glass tonight, the offensive rebounds off missed free throws, some of the 50-50 balls they got, I thought they out-competed us.”

Ohio State scored its second-lowest point total of the year, but still held onto the five-point victory. Holtmann said the Buckeyes need to “recommit” to playing strong defense that they played before the COVID-19 pause where they held opponents to 5.9 less points per game.

“We can’t overwhelm you with defensive ability across the board,” Holtmann said. “We lost a little momentum, and I think we’ve got to continue to reconnect. Our Northwestern game we scored, it was probably our worst defensive efforts of the year. So, I think just that and the Wisconsin game, both those games we had to get that back.”