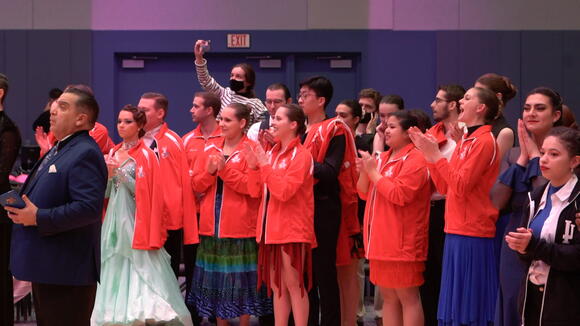 Ballroom dancing club DanceSport at OSU is both a competition club and a social club, offering members the chance to compete in at least one of the eight competitions throughout the year or just attend classes and social events. Credit: Andres Ibarra | Arts & Life Producer

One dance-based student organization on campus could almost be considered two organizations in one.

DanceSport at OSU is a ballroom dancing club with social and competition sides, according to its website . Although the organization offers classes and competitions in styles such as rumba, the cha-cha, the foxtrot and the waltz, dance classes and upcoming social events such as a Valentine’s Day Masquerade Ball, tie-dye social and Chipotle fundraiser offer other ways for members to stay involved.

“We have the social side, which is my jurisdiction, and we have the comp side, but a lot of members do overlap,” Mimi Cai, a fourth-year in data analytics and social vice president of the organization, said.

Though some members choose to participate solely in the social aspects of the team, which include special events and dance classes, many of them choose to compete in at least one of eight competitions throughout the year, Timothy Gay, a fifth-year in biochemistry and competition vice president, said.

Gay said at each competition, members can participate in nine of 22 possible dance styles. Although there are approximately 30 members currently on the competition team, anyone who wants to compete can do so without auditioning.

“I love seeing all the newcomers who actually go out on the floor and dance what I taught them, and I’m just like, ‘Yes! They’re doing what I told them to do! They’re doing so great!’ I’m just so proud of them,” Cai said. “That’s one of my favorite moments. I just like watching my students dance.”

“I think that’s what really makes our group unique because we explore both the social side and the competitive side,” Cai said.

Gay said there is no commitment for members to attend all of the classes and that interested students can come to one of the classes, all of them, or anywhere in between.

“They’re just as much a part of this club as those who are here every single day to compete,” Gay said. “It’s all up to, you know, as much as you want to come.”

Classes average about 30 members depending on the day, skill level and style of dance being taught in a given week, Gay said. Each class requires attendees to wear a mask, according to an Instagram post .

To join DanceSport at OSU, interested students only need to show up to one of the meetings or rehearsals. The club has annual fees that go toward the professional coach and rehearsal space. More information about DanceSport at OSU can be found on their website and Instagram page .