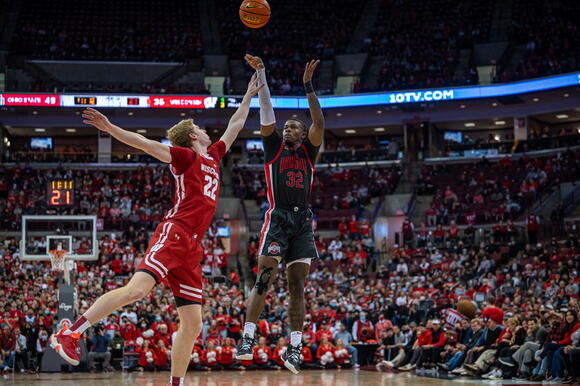 Despite making a run and pulling within six points with less than a minute to go, the Buckeyes dropped the second of their last three games 78-68 to the Badgers Thursday.

An 11-0 Buckeye scoring stretch brought the game to 74-68 with 55 seconds left on the clock. They made five of their last six shots, but a pair of free throws and emphatic dunk by sophomore guard Johnny Davis helped the Badgers (14-2, 5-1 Big Ten) keep Ohio State at arm’s reach.

Wisconsin senior guard Brad Davision led all scorers with 25 points, shooting 7-of-12 from the field. He scored 10 points in the final 5:01 to help the Badgers close the game.

Ohio State shot a season-low 16 percent from 3-point range. The Buckeyes’ 11 turnovers were their fewest in their last eight games, though, and they managed to outscore Wisconsin 46-32 in the paint.

The Buckeyes shot 56.3 percent in the second half, surpassing their 42.9 percent first-half total. Their 50 percent total eclipsed Wisconsin’s 47 percent shooting from the field.

Junior forward E.J. Liddell — coming off a career-high 34 points Sunday — paced Ohio State with 18 points, shooting 6-of-12 from the field, but fouled out with 3:18 remaining. Liddell added six rebounds and two blocks in 31 minutes.

The Buckeyes’ offense slumped in the first half. They committed seven turnovers, allowing the Badgers to convert 10 points, and shot 42.9 percent, beginning 0-for-12 from 3-point range until Liddell connected on their first with 13:23 in the second half, however.

Ohio State continues its stretch of three games in five days against Penn State in Columbus at noon Sunday. The game will broadcast on Big Ten Network.