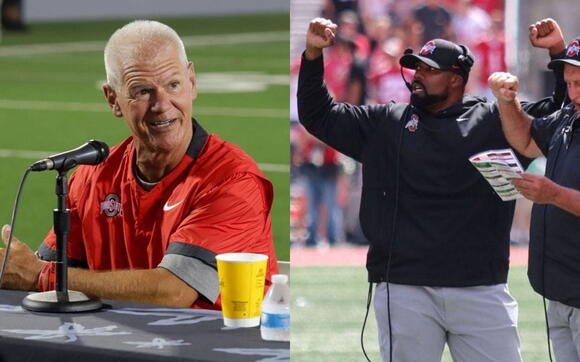 Former defensive coordinator Kerry Coombs and linebackers coach Al Washington will not remain on the Buckeyes’ coaching staff into 2022, according to Letterman Row’s Austin Ward .

Coombs and Washington will depart Ohio State after seven and three years in the program, respectively.

Hired first in 2012, Coombs spent a total of seven years on the Ohio State coaching staff after rejoining in 2020. He spent the 2018 and 2019 seasons as the secondary coach for the Tennessee Titans before returning to the Buckeyes.

Coombs served as the cornerbacks, special teams coordinator and defensive coordinator over his two stints with Ohio State.

The 2021 season challenged Coombs and the Buckeyes’ defense, as Ohio State allowed nearly 373 yards per game. Coombs moved from the sideline to the press box following the Buckeyes’ Week 2 loss to then-No. 12 Oregon, while secondary coach Matt Barnes took over play calling duties.

Washington arrived in Columbus in 2019 after spending a season as the linebackers coach for Michigan.

In 2020, Washington produced four NFL linebackers — two of which were drafted in the 2021 NFL draft. Tuf Borland and Justin Hilliard were scooped up as undrafted free agents.