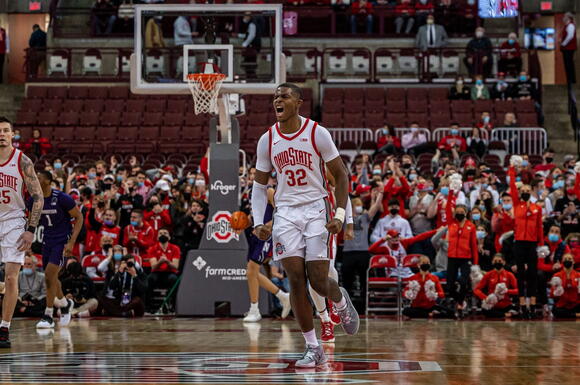 The 6-foot-7 Buckeye knocked down all six shot attempts for 17 points, setting a new personal best with five 3-pointers in the process. Liddell finished with a career-high 34 points on 12-of-20 shooting, and while the numbers seem flashy, he said he was just playing his game.

Prior to Liddell’s career night, he’d endured one of the most difficult slumps of his career.

Ohio State went 22 days between games due to a COVID-19 outbreak within the program. When the Buckeyes resumed play Jan. 2, Liddell shot just 5-for-26 at Nebraska and Indiana in their two games after their return.

He kept his now-24 game streak of double-figure scoring alive, but the Buckeyes’ leading scorer hadn’t played up to his capability. Liddell said he wasn’t going to be a perfect player and knew this season “was going to be a lot of ups and downs,” so he’s drawn inspiration from those he learns the most.

“I watch guys like Steph Curry right now, who just broke the 3-point record, he’s struggling a little bit. Everybody knows how much he impacts the team,” Liddell said. “Just me as a player, I know I impact the game more than just scoring. I’m going to keep doing that no matter how long I play.”

Liddell said he didn’t do anything different during his routine Sunday, adding he felt “a little bit more in shape” and he’s still working to get more physically sound, but he heard the outside noise.

“I came into this game with the same mindset. A lot of people was downing me after two bad games this past week,” Liddell said. “But truthfully, I just kept my head up and just kept playing with confidence and doing what I know how to do.”

Liddell rounded out his performance by recording the 400th rebound and 100th block of his career, helping Ohio State bounce back into the win column.

Assistant coach Jake Diebler — who served as acting head coach Sunday — said he thought Liddell needed no extra motivation despite his recent play. Diebler praised Liddell’s work ethic, which he said helps him compete among the best in the Big Ten.

“We felt like as a staff it was going to be a matter of time that he was going to get it going again. He works really, really hard,” Diebler said. “Continuing through this season, he’s put himself in position to have really, really good, high-level games.”

Liddell said most of his makes Sunday came from open looks, resulting from the Buckeyes’ ability to spread their offense and the emergence of freshman guard Malaki Branham — who had a career night of his own Jan. 2.

Head coach Chris Holtmann — who missed Sunday’s game due to COVID-19 health and safety protocols and watched from home — said on 97.1 The Fan that Liddell looked like how he performed before the Buckeyes’ three-plus week layoff, leading to an impact on others.

“I think E.J.’s play injected our team with some needed confidence and life,” Holtmann said.

Liddell’s 34 minutes Sunday were also a season-high, and he made the most of each. He currently is second in blocks, fourth in scoring and tied for eighth in field goal percentage among all players in the Big Ten.

No matter how prolific a role he plays, Liddell said he ultimately wants Ohio State to win games. Breaking out of his short skid will certainly help going forward, and he said he’ll do so in any way he can, whether he shoots like Curry or just plays like himself.

“I always want the ball, just to create or score. I was wide open,” Liddell said. “I’ll take every shot I see I’m open.”