Men’s Hockey: Lohrei and Thiesing thriving together both on and off the ice 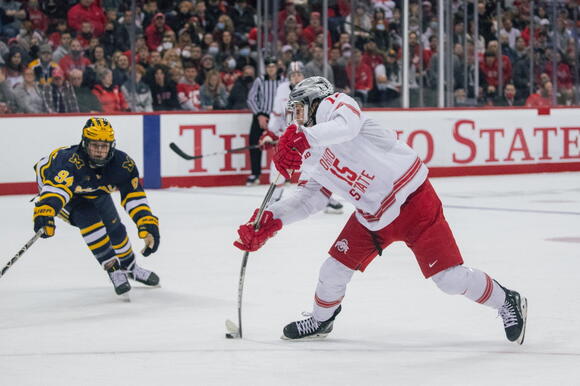 Both Lohrei and Thiesing committed to head coach Steve Rohlik and his staff in 2018. Like most high school hockey players, the pair elected to spend time in the United States Hockey League before enrolling at a university.

Lohrei, a native of Madison, Wisconsin, and Thiesing, who hails from Nashville, Tennessee, were each selected in Phase II of the 2018 USHL Draft. Lohrei became a Waterloo Black Hawk, while Thiesing was picked by the Green Bay Gamblers.

Prior to making an appearance with the Black Hawks, Lohrei was traded to his home-state Gamblers in February 2019. It was then that the two strangers began their relationship.

“ Before we came to Green Bay, we both knew of each other, but we never really met,” Thiesing said. “We knew each other through friends. Going into Green Bay we both knew that we were committed to the same school, so we became friends right away.”

Despite knowing that they’d be teammates in the future, as well as the present, the two said their relationship wasn’t forced.

“If he would’ve been committed to another school, we’d still be as close as we are,” Thiesing said. “I don’t really think that’s why we became such good friends. If he was going somewhere else, we’d still be in contact.”

The duo spent parts of three seasons in the USHL, suiting up for the Gamblers over 90 times. During the 2020-21 season, Lohrei paced Green Bay with 59 points, while Thiesing was third on the team with 44. As a result of his standout play, Lohrei was named the 2021 USHL Defenseman of the Year.

Thiesing and Lohrei arrived at Ohio State in May 2021, following the conclusion of their season with Green Bay. Lohrei said it was a blessing to go through the experience with someone he already knew well.

“It was just really nice,” Lohrei said. “Coming into a new scene, new guys to meet and having him, someone to go through it all with, made things a lot easier.”

The relationship established between Lohrei and Thiesing before arriving in Columbus is something Rohlik said he hasn’t seen often as a coach, but certainly something he’s welcomed.

“I think they’re best friends and they’ve been together for a couple of years,” Rohlik said. “Anytime you can get a couple of guys like them, it helps with your team culture. They’re kind of going through things together as freshmen, so I think it’s a good thing.” 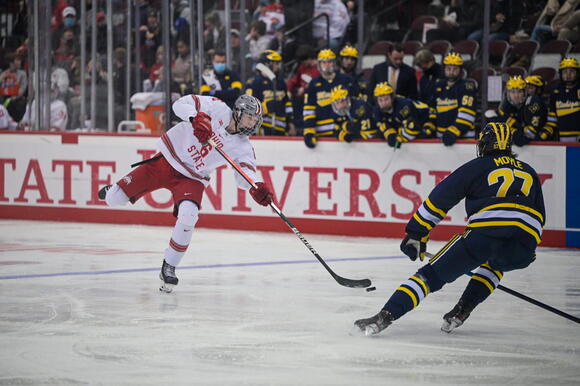 In addition to one another, they also lived with freshman defenseman Cole McWard and freshman goaltender Jakub Dobeš, who also featured in the USHL with the Omaha Lancers last season.

The four roommates recently bought a new couch for the apartment, one of the first “big-boy” purchases Thiesing said he’s made in his life.

Spending plenty of time on and off the ice together, Lohrei said he’s grateful to have Thiesing around.

“It’s nice having someone to do stuff with,” Lohrei said. “Whether that’s making dinner at home, watching a movie or a show, or if it’s getting out on a Sunday and going hunting, we’re always out doing stuff. He’s a fun guy to joke around and laugh with.”

Although the roommates are yet to combine for a goal with Ohio State, their time spent together away from the ice has strengthened their connection on it. Lohrei said there’s “definitely good chemistry” when he and Thiesing put on their skates.

Through 22 games, Lohrei is second for the team lead in points with 19. Thiesing, who has also appeared in every contest for Rohlik’s side, has 17 points on the season, including five multi-point efforts.

Lohrei, a second-round selection of the Boston Bruins in the 2020 NHL Entry Draft, said he’s much more interested in team success than his own.

Rohlik has been pleased with the rookies’ output so far in their debut campaigns. In addition, he believes the pair are just “scratching the surface.”

“They’ve contributed from day one, which has been a huge help to the team,” Rohlik said. “They didn’t need to come in and carry the load, but we expect all our guys to come in and contribute at some point. They’ve certainly got so much room to grow.”

Nearly three years after they began dreaming about moving to Columbus with one another, Thiesing and Lohrei are finally seeing their dreams come true.

“Being here now is everything in the world that we could’ve expected,” Lohrei said. “It’s pretty amazing, and to be going through it with him, one of my best friends, it’s pretty special.”